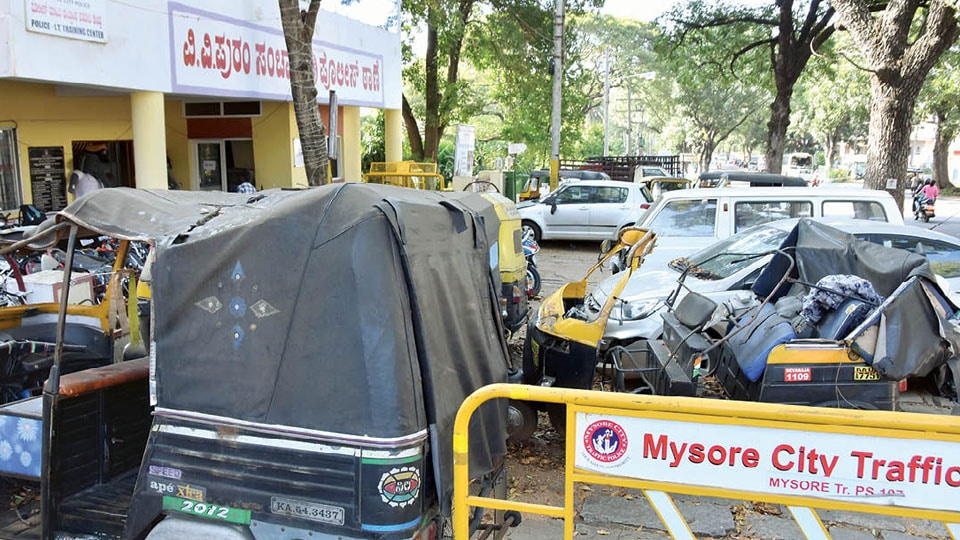 Mysuru: The Mysuru City Corporation (MCC) every now and then clears footpath encroachments with the help of Police. But will the MCC clear footpath if the Police themselves occupy walkways?

The footpath in front of the V.V. Puram Traffic Police Station and the footpath right across the road towards Gokulam is crammed with vehicles  seized by the Police, causing difficulty to pedestrians.

This busy road that connects V.V. Mohalla, Yadavagiri and Gokulam not only witnesses heavy traffic but also heavy pedestrian movement as there is a bus stop, school, restaurants and yoga shalas.

Now with seized vehicles parked outside and restaurants taking over footpaths, pedestrians are forced to walk on the busy road.

These vehicles seized in different cases are gathering dust for years awaiting legal disposal. There are over 10 cars, four goods autos, 9 passenger autos, and 10 two-wheelers right in front of the V.V. Puram Police Station and there is a big private bus, one Omni van and two cars on the footpath opposite the Station which are seized   and parked.

Is there no space?

“Traffic cops penalise motorists who violate rules but they fail to see that they have not left any space for us to walk, and are hence violating our space,” said Mahindra, a resident of V.V. Mohalla. At V.V. Puram, there is a huge space behind the Traffic Police Station but  this place is used to park those vehicles that have been towed away for ‘No Parking’ violation.

“This footpath has been like this for over a year. Since the  Station is near a signal light, we pedestrians have to wait for the traffic signal to turn green so the vehicles move out and we can step onto the road to go ahead as this footpath is blocked by seized vehicles,” said Navitha, a regular office-goer.

Another resident Bharath who walks from his house in Gokulam to the shops on Gokulam Road said “Since last year, these seized vehicles and restaurants chairs on footpaths along Gokulam Road have become a menace.”

Many residents use the footpath along this road as it connects Temple Road, KRS Road, V.V. Mohalla and Yadavagiri. Now these vehicles are not only a hindrance but also an eyesore.

Many residents around this area asked, “When commoners violate the law, we are immediately penalised but when law- keepers themselves break the law and can see footpath violations by restaurants right in front of their Police Stations and do nothing, what message does that send?

It may be recalled that the MCC had stated that it would put an end to the menace of stray cows and footpath vendors respectively. Each Department formed teams to clear the roads and also footpaths for smooth movement of motorists and pedestrians.

But many Mysureans complain that they do not see any change in the situation as stray cattle continue to block traffic and street vendors continue to set up shop without fear or hindrance from officials.