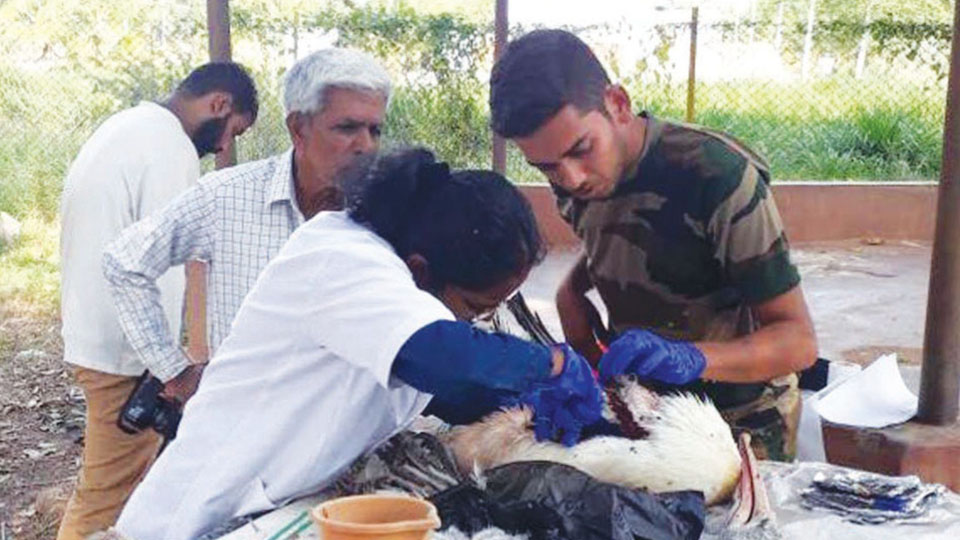 Bharathinagar (Mandya): Following serial deaths of pelicans at Kokkarebellur near here, a team of researchers from Salim Ali Centre for Ornithology and Natural History (SACON) at Coimbatore in Tamil Nadu visited Kokkarebellur on Feb. 14 and conducted an inspection.

The Research team led by SACON Senior Biologists C. Karthikeyan and V. Kiruba Nandini who visited the village conducted a detailed inspection of the place where pelicans are found in large numbers and later conducted post-mortem of the dead birds.

Speaking to the media after  conducting post-mortem, the Research team members said that round worms found in the dead birds was found in the carcass of the pelicans for which they had conducted post-mortem. The viscera of the dead pelicans have been collected for further tests, they added.

Meanwhile, Scientists Dr. H.K. Muniyellappa, Dr. Shivaramu and Dr. B.M. Chandranayak of Institute of Animal Health & Veterinary Biologicals at Hebbal in Bengaluru, said that infestation of round worms was the cause for pelican deaths at Kokkarebellur and told the Research team that they had submitted a report on Dec. 9 in this regard.

The team later visited the trees where pelicans are roosting and observed their movements and behaviour and also inspected the chicks of pelicans and painted strokes. The team also visited the water bodies in the village and later visited Simsha River and collected samples of water and mud besides collecting samples of mud and water at Gurudevara Hallikere and Solakere.

The visiting Research team said that they would submit a report after conducting tests of water and mud they had collected in two days and added that preliminary assessments and reports say that round worms was the cause for the death of pelicans, but tests would be conducted to know more.

Meanwhile, bird lovers have expressed their anger over the absence of German researchers in the team which visited Kokkarebellur on Feb. 14.

On Feb. 14, the Indo-German team was supposed to arrive to conduct a joint research, but the absence of German researchers in the team has irked the bird lovers.