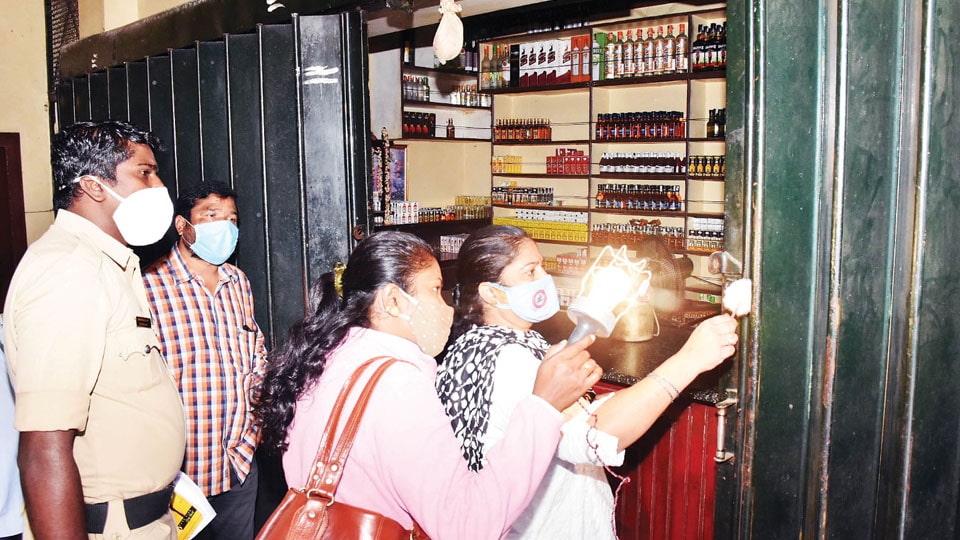 Burglars make away with cash, liquor bottles and cigarette packs

Mysore/Mysuru: Our city experienced an unprecedented case of serial theft on a single night yesterday sending shock waves among residents.

Three shops were burgled and an attempt was made on two shops last midnight between 12.30 am and 1.30 am. All the shops are located near Agrahara Circle, barely 100 metres from KR Police Station.

The thieves were so desperate for cash, liquor and also cigarettes that they took away whatever stocks they could. Smartly, they turned CCTV cameras at three places to other directions and certain visuals showed them wearing monkey caps and gloves.

The first theft was reported at Akshaya Bar and Restaurant near Agrahara Circle, a stone’s throw away from K.R. Police Station. Usually traffic density is high here with vehicle movements even in the night. Thieves managed to break open the heavy lock that was latched on to the iron shutters. They twisted the shutter to enter inside.

Once inside, the burglars stole Rs. 75,000 cash from the cash collection box and also took away select costly liquor bottles that were on display inside the glass shelves.

Next the burglars targeted Ramanna and Sons, a beeda stall in front of Akshaya Bar near Agrahara Circle. The shop is run by Prakash and Rs. 30,000 cash and many cigarette packs were stolen.

After looting Ramanna and Sons, thieves tried to break open the shutters of Udupi Upachaar. As it was an old-model heavy rolling shutters, burglars could not gain entry into the hotel. Before trying to break open the hotel shutters, burglars twisted the CCTV cameras to the other side so that their visuals are not filmed. However, the Police have found out that the criminals were wearing gloves and monkey caps and this shop was targeted at 12.45 am.

Next, they opened the shutters of Sri Delhi Mart near Agrahara Circle. The shop sells dry fruits and condiments made out of cashew and dry grapes. Here they could not find any cash. They then broke open the shutters of Sri Varalakshmi Sweets at around 1.30 am and stole Rs. 450 that was kept in the cash box.

All the thefts came to light when the owners came to open their shops this morning. Dog Squad and Finger Print experts are conducting a mahazar and Krishnaraja Inspector Srinivas and staff have visited the area. As the burglars were wearing gloves, tracing their finger prints is not an easy task, admit Police sources.