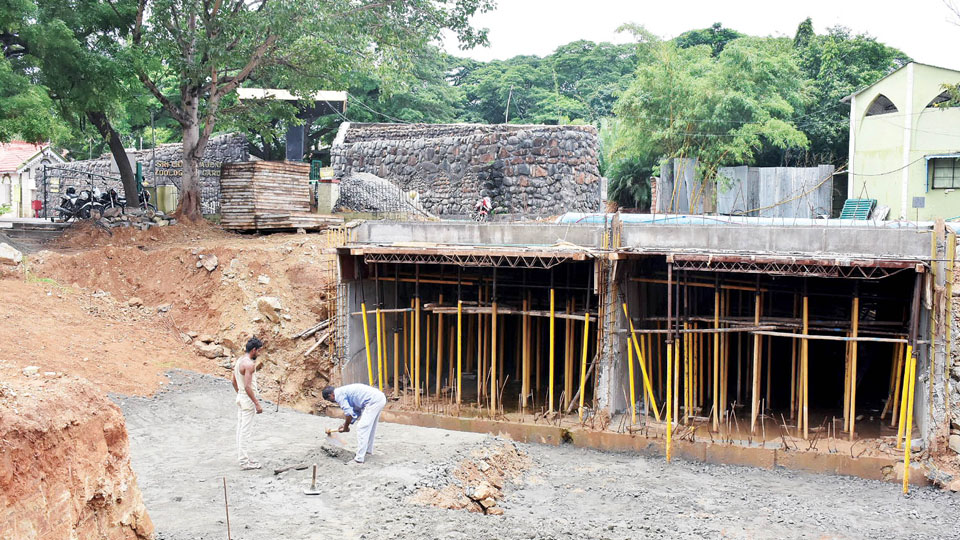 Zoo Road may be ready for traffic in 15 days

Mysore/Mysuru: The subway works, connecting the Zoo parking lot to the Zoo entrance gate, which was taken up on Jan. 17, is now going on in full pace and the road in front of Mysuru Zoo (Shalivahana Road), which was blocked for traffic is likely to be opened in the next 15 days.

Mysuru Zoo Executive Director Ajith M. Kulkarni, speaking to Star of Mysore this morning, said that the roofing works of the subway has been completed and curing works have been taken up, which will be completed in 15 days. He further said that after the curing works are completed, the road would be thrown open for traffic. Pointing out that cement plastering and design works inside the subway is to be taken up, the Zoo Executive Director said that an approximate two months is required to complete the works.

It may be recalled that the subway works that began on Jan. 17 was scheduled to be completed by March 2. But the works were delayed by a month by huge boulders and water pipeline while digging the trench for the subway and another three months were wasted following lockdown which hampered the supply of construction materials and non-availability of labourers.

The construction of the subway was taken up to enable visitors and tourists to cross the Shalivahana Road (road in front of the Zoo) from the parking area as the road usually witnesses heavy traffic throughout the day.

The tender for the construction of the subway at a cost of Rs. 1.75 crore was awarded to Vinyas Builders of Bengaluru. Initially, the subway works was scheduled to commence from Jan. 2 and the Police had given a deadline for the completion of the construction by Feb. 15. But as there was influx of tourists to city then, the work was postponed for 15 days and it began on Jan. 17. It was scheduled to be completed by March 2.

The subway will be 24 meters in length, 4.9 mts wide and 10 ft. tall. A total of 13 ft. deep trench was dug up for the purpose. Painting on the subway walls with ‘Wildlife Conservation’ as the theme would be taken up once the cement plastering inside the subway is completed.