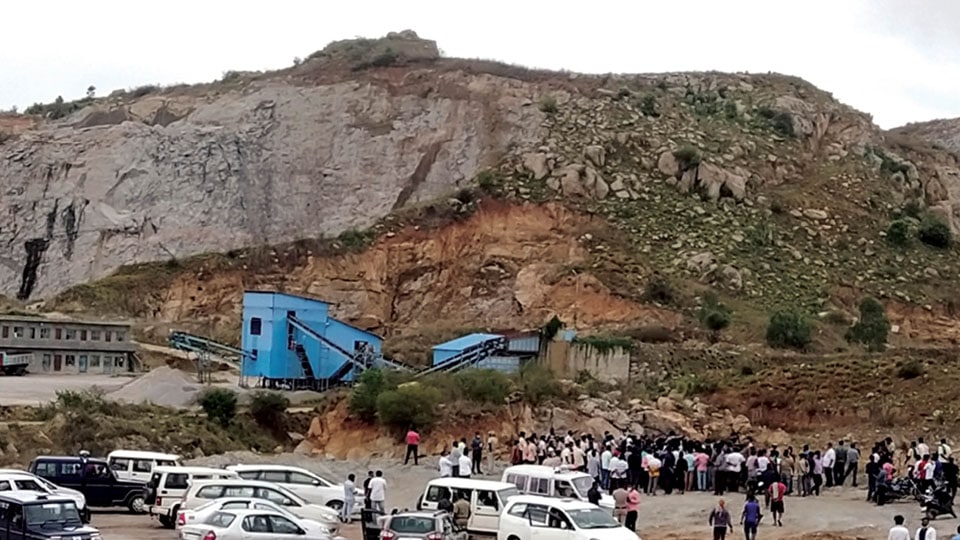 Srirangapatna/Pandavapura: After her visit to the Krishna Raja Sagar (KRS) Dam where she inspected a couple of sluice gates and interacted with the officials from Cauvery Neeravari Nigam Limited  (CNNL), Mandya MP Sumalatha visited certain quarries at Baby Betta in Pandavapura Taluk, the epicentre of stone and granite mining activity.

The MP encountered officials who were fumbling for answers on the number of quarries operating in the region, the actual owners, royalty paid to the Government and also fines levied from illegal crushers. When she did not get the answers, Sumalatha charged at the officials of the Mines and Geology Department and other officers.

Interacting with the MP, quarry owners said that they were ready to shift the crushers if at all the stone blasting activity threatens the safety of the Dam. They demanded the constitution of an expert panel who are abreast of reservoir and mining technology.

They urged the MP to initiate the trial blasts that are already pending with the Council of Scientific and Industrial Research – Central Institute of Mining and Fuel Research (CSIR-CIMFR), a Central Government enterprise.

Speaking to reporters after inspecting the Dam yesterday, the MP said that she was in favour of constituting a Task Force to oversee the protection of the historic Dam that is a lifeline of people of South Karnataka.  I will continue to use the ‘Save KRS, Stop Illegal Mining’ hashtag till quarrying stops,” she said.

“There is absolutely no co-ordination between the officers of various Departments concerned with the safety and security of the KRS Dam. While the Dam engineers are focussed only on its structural stability and water management, the Police were engaged in routine security aspects. There is no single entity or authority for the overall safety of the Dam. A Task Force must be constituted comprising members of different Departments, who will meet regularly to review the overall safety of the Dam,” she said.

“My only focus is the interest of the Dam in the longer run. I am in favour of a blanket ban on any kind of mining or blasting within 20 km radius of the KRS and a proper implementation of the ban without succumbing to political pressures,” she said.

On the question of cracks in the Dam, Sumalatha said that she would not accept that there are no cracks. “Crack-filling and grouting works were taken up at a cost of Rs. 76 crore last year only because there were cracks inside. A comprehensive probe should be conducted,”  she demanded.

The Karnataka Rajya Raitha Sangha (KRRS) and farmers from Mandya expressed support to Sumalatha and were at the Dam site during her visit. KRRS Mandya President Kempugowda said farmers have been raising their voice against quarrying for 20 years.

“Tremors and vibrations around the Dam and also within the Dam limits is a matter of concern. KRRS former President late K.S. Puttanaiah had raised the issue in the Assembly and fought against quarrying,” Kempugowda recalled.