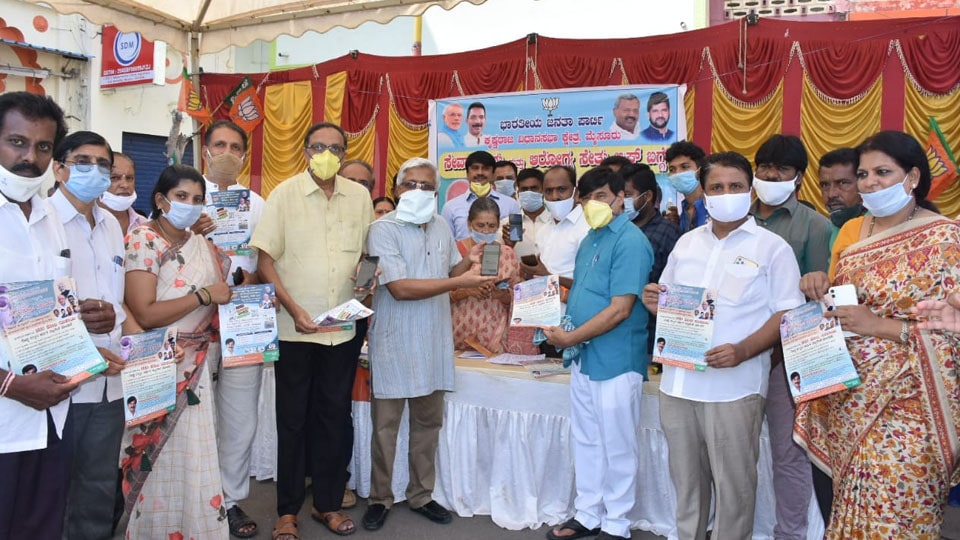 Mysore/Mysuru: KR Constituency MLA S.A. Ramdas, with an aim to make a minimum of 1 lakh people download the Mobile Apps developed by the Government for the welfare of people, today is leading the Karnataka State Government’s ‘Seva Sindhu’ and Central Government’s ‘Aarogya Setu’ Apps Download Drive at all the 19 Wards coming under his Constituency.

Speaking after the launch, Dr. Balasubramaniam said: “India’s fight against Coronavirus is gaining attention at international level. Attempts are on to make India Corona-free soon. Just because lockdown has been relaxed, people should not forget to take precautions and must continue using masks and sanitisers. We must create awareness among everyone.”

He also asked people to stop buying foreign goods and encourage Swadeshi goods which will in turn help in economic growth.

MLA Ramdas said: “We will get a clear picture on which all sectors will come under ‘Seva Sindhu’ after the State Cabinet meeting today. Hence, auto drivers, who will be one of the beneficiaries, should keep their Driving License (DL), Badge, Bank Account Number and Aadhaar Card ready and approach the browsing centre and register.”

Also, Ramdas urged people to donate minimum of Rs.10 towards PM CARES and CM Relief Funds and said that along with Apps downloading drive, volunteers will also guide willing people to donate for the same.

Stating that they aim to make mimimum 1 lakh people download these apps during the drive today, Ramdas also said that they would continue to create awareness in order to take the number to 2 lakh by the end of this month.

Beneficiaries can visit the following browsing centres and apply for various schemes and financial aid by paying Rs.20 for registration and uploading of forms: