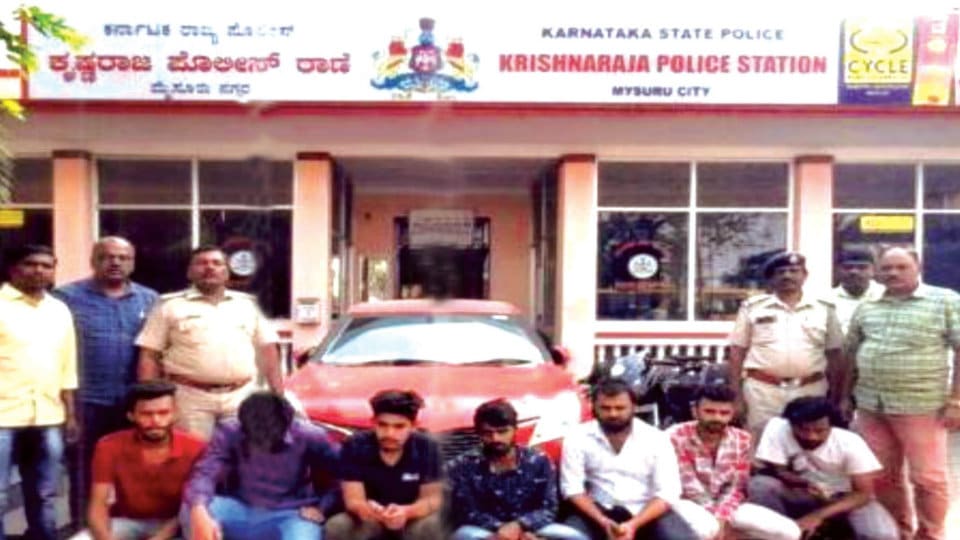 Mysuru/Mysore: Krishnaraja (KR) Police have arrested seven persons on charges of assaulting a youth for petty reason besides kidnapping the youth, extorting money and taking away the youth’s two-wheeler.

The arrested are 27-year-old Nithin and 22-year-old Jayanth of Krishnamurthypuram, 25-year-old Akarsh of Ittigegud, 20-year-old K.V. Manjunath and Chandru of Saraswathipuram, 23-year-old B.R. Bharath of Somwarpet in Kodagu and 20-year-old S. Chethan of Alidhiddi in Nanjangud taluk.

Details: On Jan.14 at about 11.30 pm, one Anil, a resident of K.R. Mohalla was standing along with his friends in front of Pastry World near Trilok Bar. At that time Nithin came  to the spot and asked Anil for a match box to which he replied in the negative. Soon, Nithin picked up a fight and assaulted Anil and his friends.

Later, Anil dropped his friends to their houses in his two-wheeler and was returning home, when Nithin and his friends, who were following Anil in their car, rammed the car into the two-wheeler Anil was riding and made him fall down.

Later, Nithin and his friends dragged Anil into the car, where they threatened him (Anil) with a knife and snatched away his Rs.21,050 cash. They then took Anil to a room in Saraswathipuram, where they kept him in illegal confinement and demanded Rs.50,000, failing which they threatened of killing him.

On Jan.15, Anil in the pretext of going to the washroom, escaped from the room and reached a hospital, where he got himself treated and later reached K.R. Police Station and lodged a complaint. Based on the complaint, K.R. Police, who registered a case, conducted an operation on Manasara Road in Ittigegud on the same day and arrested the seven accused.

During interrogation, the accused are said to have confessed of committing the crime and based on the information provided by the accused, the Police have recovered Anil’s two-wheeler, one Redmi cell phone and Rs. 4,000 cash besides seizing three two-wheelers, one car and five cell phones used for the crime.