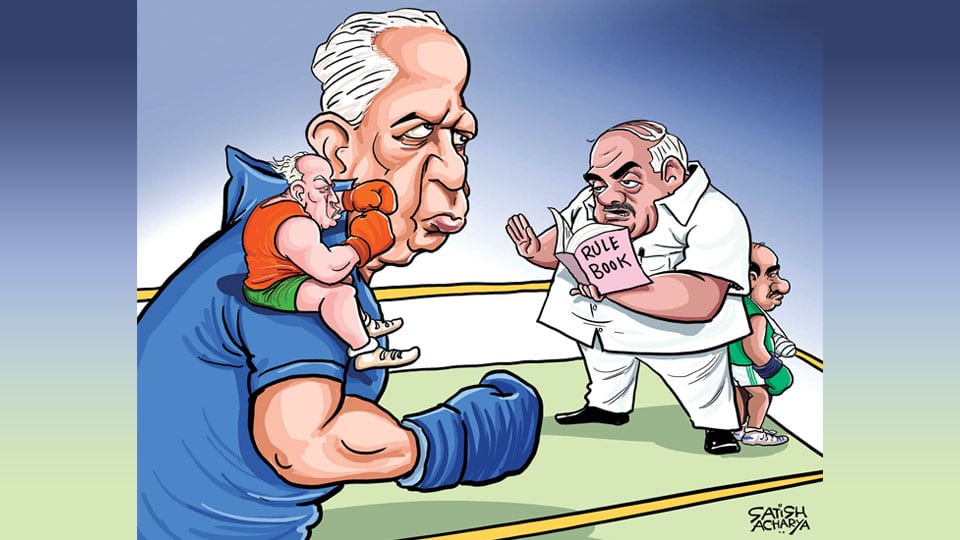 Oh! Just when we thought after the exciting Cricket World Cup final there is nothing to excite us, Karnataka Political League began. Our MLAs started playing political cricket. But what was to be a final one-day match yesterday has now turned into a test match, thanks to Square-Leg Umpire, Speaker  K.R. Ramesh Kumar and Third Umpire, Governor Vajubhai R. Vala.

Speaker Ramesh Kumar kept saying I’ll do everything by the Constitution but for a man who cried when Siddharamaiah lost in Chamundeshwari elections and who has refused to accept resignations of the rebel MLAs even after 10 days, we wonder where the allegiance lies — the Constitution or the Congress Party, his Party.

Similarly, the Governor too sent three letters rushing a Floor Test and a letter of “concern” as he suspected “horse-trading.”  We have to ask, didn’t the Governor notice rebels flying away in private jets to Mumbai and did he not hear about horse-trading rumours for 10 days? Wonder with whom his allegiance lies? The Constitution or the BJP, his Party?

Now, while the shadow-boxing between the Speaker and the Governor continues, we wonder what the Speaker is hoping to achieve by delaying the Trust Vote? He has given time for discussion, but what are they discussing? It is clear that time is being wasted.

It became obvious when junior Minister Priyank Kharge claimed it was alright for the House to debate the motion even for 60 days!  We wish they discussed Karnataka’s water crisis and urban development with such fervour for 60 days, but alas!

Finally, the Speaker, who in a filmy style thundered, “there is still no one born who can put pressure on me,” adjourned the discussion till Monday.

But what can Congress achieve in two days? It all boils down to two factors — “disqualification” and “resignation.”

The coalition wants to bring the rebels back and issue a whip, which means they have to compulsorily follow the orders of the Party and vote for the party in the Trust Motion. If they don’t they can be disqualified, and if they are disqualified then these rebel MLAs become ineligible for appointment as Ministers even if BJP stakes claim to power.

So this way if the BJP has promised these rebels a Ministerial berth that Ministerial incentive becomes null.  Also if the rebels are disqualified they would have to stand for a re-election to become MLAs again and only then can they accept a Ministerial berth. This is what JD(S)  and Congress want.

Unfortunately, the Supreme Court, in its ruling, said the rebel MLAs cannot be “compelled” to attend the Trust Vote; this protects the rebel MLAs from the party whip and subsequent disqualification which means the coalition now has to prepare itself for a fall.

Now, on the other hand, if their resignations are accepted, the rebel MLAs will be still eligible for a Ministerial berth if the BJP comes to power. But they will still have to fight a re-election, but they have six months time to do that until which time they can enjoy their status as a Minister. This is what BJP wants and going by how the rebels have been protected, may very well achieve it.

During the discussion, the coalition MLAs questioned whether the BJP was misusing the Governor’s Office. May be the Congress can ask their own party leaders how they used the Governor’s Office in Karnataka when the first BJP Government in South India headed by B.S. Yeddyurappa was brought down just a few years ago.

Congress should look at its own party’s history. In 1982, Haryana had a Hung-Assembly and Governor G.D. Tapase invited a few MLAs who were defectors and made them join Congress, which then despite being a minority party formed the Government with Bhajan Lal as CM. Interestingly, just the previous day, Devi Lal had proven majority to him !

Of course, it’s not just Congress, even BJP uses Raj Bhavans as retirement homes for party loyalists and political instruments —  from Arunachal Pradesh to Goa and now Karnataka.

The 1983 Justice Sarkaria Commission had recommended that “a Governor be a person of eminence, not involved in the local politics of the State to which he or she is sent, and not a politician associated with the ruling Party at the Centre, in order to preserve the Federal balance.” But how can a Governor care for India’s Federal structure when he has got the position by caring more for his Party than his country?

It is indeed time to get rid of this ceremonial position and turn their grand retirement homes, Raj Bhavans into museums, art galleries and music centres. At least, the Government will earn some money instead of losing money, and also it will be one less threat to our Federal structure.

When BJP came to power many thought they would rid us of this vestigial position but alas. Every political party once it comes to power retains the weapons wielded by the previous Government that they criticised while in Opposition.

And so even though the Governor position is like an appendix in our body,  a vestigial organ that keeps rupturing and threatening our Federal structure, it continues to remain.

But that said, the way the Speaker is also taking his own sweet time makes one wonder may be a Governor is needed to keep him in check.

For now, BJP beware, how you have hunted for coalition MLAs, the coalition too will hunt your MLAs. In the end in this ‘hunger games’ the loser is we the people of Karnataka.