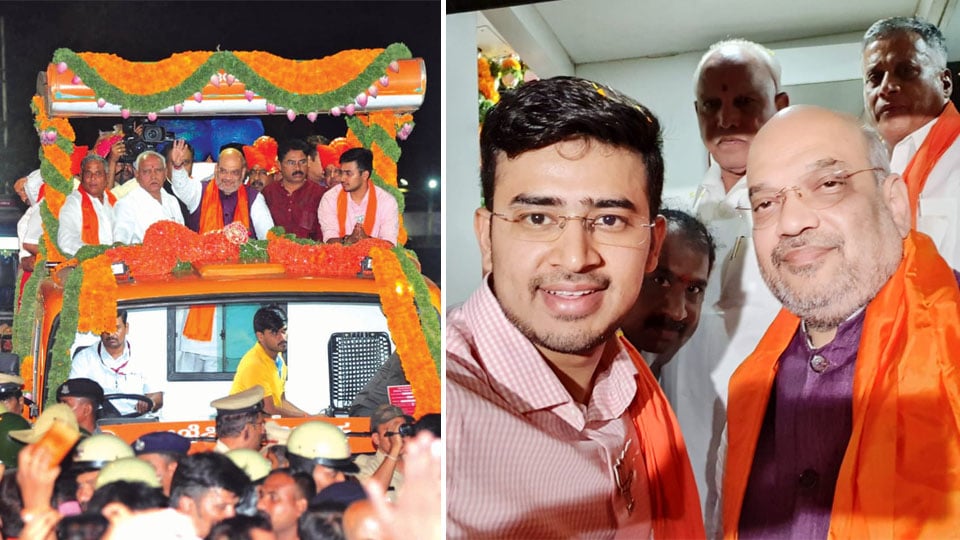 Bengaluru: Sending out a clear message to the top leadership in the State, BJP National President Amit Shah took part in a road show in Bengaluru South to back rookie Tejasvi Surya. The State leaders were forced to bury their differences and put up a united front at the ‘Shah Show.’

Shah, who visited the State for the first time yesterday since elections were declared, chose Bengaluru South Lok Sabha constituency — where the pick of Tejasvi Surya has caused some heartburn — to launch his campaign.

Surya’s nomination by the party bosses has not gone well with the local leaders, including State President B.S. Yeddyurappa and former Deputy Chief Minister R. Ashok.

One of the former Ministers V. Somanna has openly revolted against nominating the 28-year-old advocate and the State Youth BJP General Secretary to succeed late H.N. Ananth Kumar.

Due to non-cooperation of the local BJP leaders, Surya was left in the lurch and his campaign was yet to take off. After bringing this to the Shah’s notice, the latter decided to do a road show to kick-start the campaign and send a signal to party leaders that Surya has the backing of the national leadership.

Shah flew in from Tamil Nadu only for the road show, which was a show of unity by the city unit. Hundreds of enthusiastic BJP workers cheered Amit Shah chanting “Modi, Modi” as the “Rath”, a modified vehicle, covered a little more than a kilometre distance with Yeddyurappa, Ashok, Surya, Legislators from Bengaluru South constituency and also Tejaswini accompanying him.

He started his road show from Banashankari Temple and went through J.P. Nagar. Amit Shah’s road show is set to change equations as senior leaders Ashok and Somanna would now be compelled to actively take part in the campaign and ensure that Surya wins and retains Bengaluru South, one of the BJP’s stronghold. Ananth Kumar had won six consecutive terms before he died in December 2018.

Sources said that before Amit Shah arrived in Bengaluru, all five BJP MLAs and BBMP Councillors from the party in the constituency held a marathon meetings where “differences were ironed out and responsibilities assigned.”

“There was some confusion. But with Amit Shah specially endorsing Surya, everyone has fallen in line,” sources said.