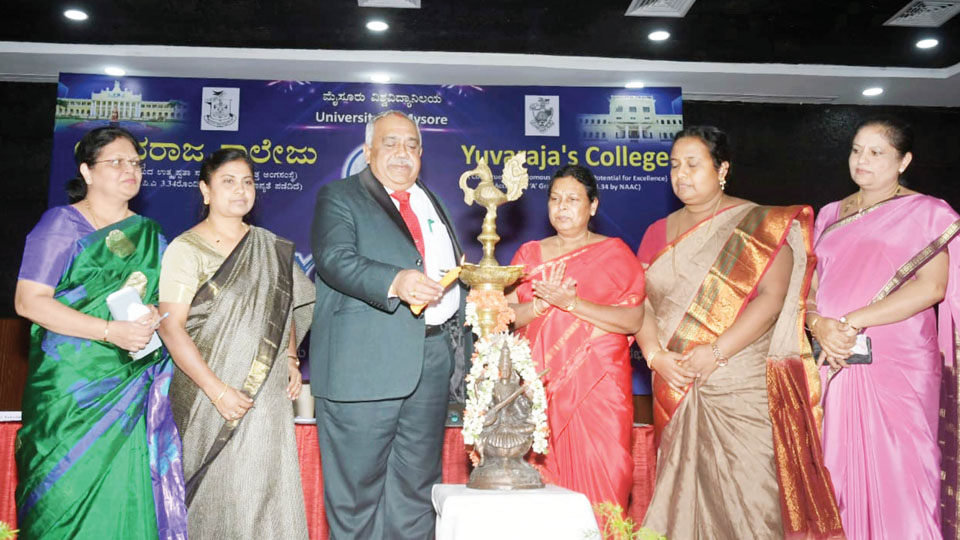 Mysore/Mysuru: University of Mysore (UoM) Vice-Chancellor (VC) Prof. G. Hemantha Kumar called upon the students to come up with new ideas and thoughts and share the same with UoM Career Hub.  He was speaking after inaugurating YUREKHA-2022, a Science Fest organised by Yuvaraja’s College (Autonomous) as part of its Platinum Jubilee celebrations at its premises here yesterday.

“Make use of the facilities to come up with new inventions and technologies for the welfare of the masses and progress of the society. Students must involve themselves in research and become the best researcher and scientist of the country. The new National Education Policy (NEP) has provided great opportunities for students to exhibit their talent and build a successful career,” the VC opined.

Yuvaraja’s College was declared autonomous in the year 2005. Now over 4,000 students are pursuing their UG and PG courses in the College, he added.

As part of the fest being held from June 28 to 30, various scientific, technical and analytical events including general science quiz, debate, photography, treasure hunt, leadership event etc, will be held for the UG and PG students to ignite curiosity and to unleash their potential.

‘Yuva Kalarava’, a cultural programme will be held at the Open Air Theatre (Amphi Theatre) in Manasagangothri Campus tomorrow (June 29) from 5.30 pm with artistic performances. Marathon with the theme ‘Health is Wealth’ was held this morning.

Yuvaraja’s College Principal Prof. B.N. Yashoda and others were present at the event.

As the career landscape is significantly changing globally, the University of Mysore is preparing students for a job into the future, a job which they don’t know yet. The University Career Hub – A RUSA 2.0 initiative of the UoM was born in this context. The core objective is to provide career support services to students, alumni of the University and students in its 220 affiliate Colleges to equip them better for a job or start their own venture.