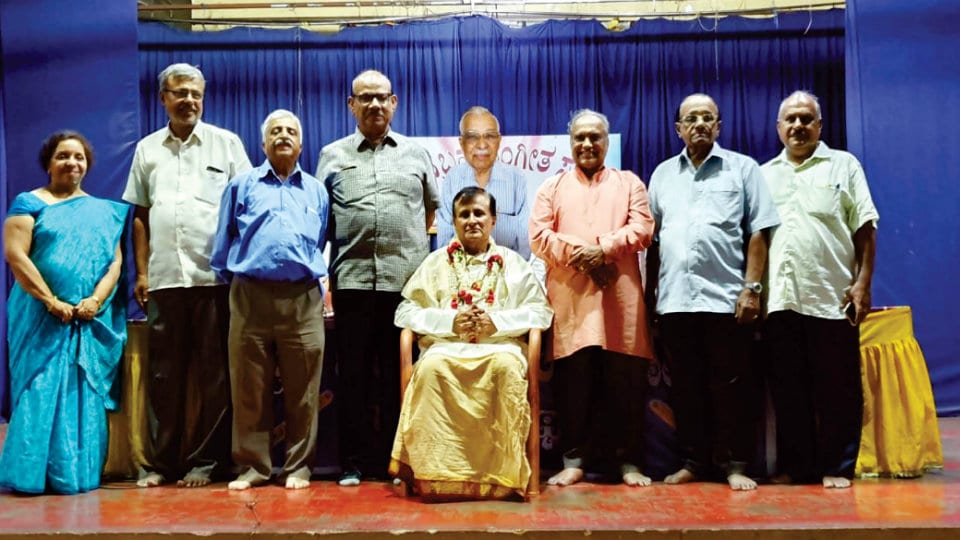 Sri Nadabrahma Sangeeta Sabha conducted a three-day Flute Festival in memory of T.R. Mahalingam from 29th May to 31st May, 2019. On the 29th, M.K. Pranesh performed, on the 30th  Mukund and on the 31st senior flautist S.A. Shashidhar with his son Supradeep.

The duo was accompanied by Aditi Krishna Prakash on violin, Sai Shiv Lakshmi Keshav on mridanga and S. Manjunath on ghata. Shashidhar was conferred the title ‘Venu Brahma’ on the occasion.

The concert was pleasing except for the persisting disturbance of the microphone which caused continuous irritation to the main artiste as well as the listeners. After the initial obeisance to Lord Ganapati in Hamsadhwani, ‘Kumari Gowri’ was presented in Gawri Manohari.

Kamavardhini was chosen as the sub main item. While Shashidhar developed the first half of the raga, the latter half was elaborated by his son Supradeep, who is promising.

Tyagaraja’s ‘Appa Rama Bhakti Ento’ was impressive in its command, with a neraval at the beginning part of the charana —   ‘Kapi varidhi’ followed by simple and elegant swaras.

Ragamalika swaras in Sunada Vinodini, Kanada and  Shahana and Desh and Kapi by the violinist were elegant.

Sai Shiv Lakshmi Keshav had a good hand in clarity not only throughout the concert but also in Taniyavartanam. S. Manjunath was supportive. Aditi on violin followed the duo like a mirror.

The concluding part of the concert included ‘Hari Neene Gati Endu’ devaranama in Karna Ranjani and a Balamurali Tillana in Brindavana Saranga.