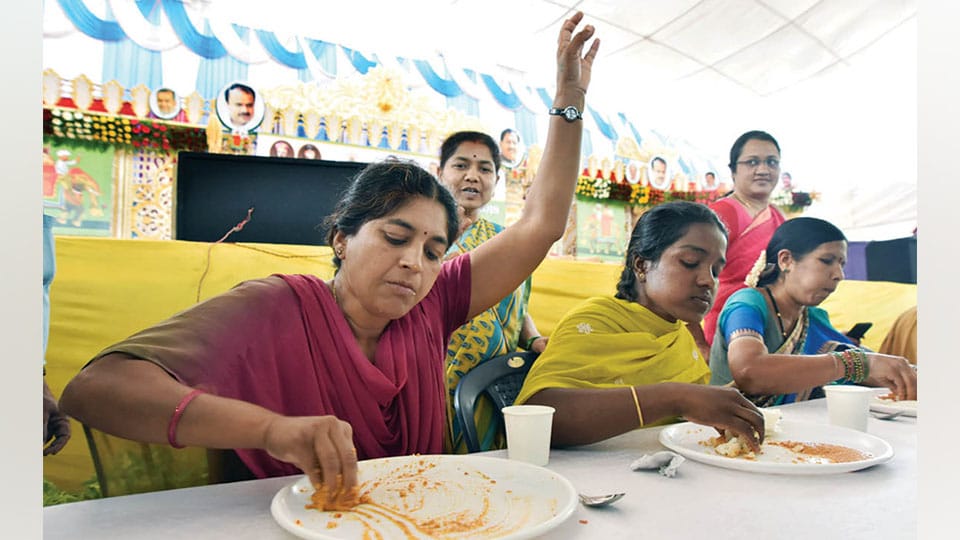 She polished off six idlies in less than a minute

The competition was organised at the Scouts and Guides Grounds by Dasara Aahara Mela Sub-Committee and each competitor was given 6 idlies, each weighing 200 grams. While many women struggled to eat the mouthful idlies, it was a child’s play for Lalitha Puttegowda who polished the plate in less than a minute.

Soon after, she raised her hands and staked claim for the top post. Some competitors were caught in a piquant situation where they could neither swallow the idlies nor spit them out. Finally all of them ate all the 6 idlies but could not match Lalitha Puttegowda’s lightning gulping speed.

Ten women had participated in the event and there were three judges. While Lalitha Puttegowda bagged the first prize, Rajashree of Vijayanagar Second Stage bagged the second prize and Kanthamani of K.G. Koppal won the third prize.

Lalitha Puttegowda is a Block Resource Person working at Nanjangud. “I love cooking as well as eating. Idli is my favourite and it was easy for me to finish it,” she said. Her husband, Puttegowda, who was cheering for her was surprised at her victory. “She doesn’t eat this much at home generally, it was surprising,” he said.