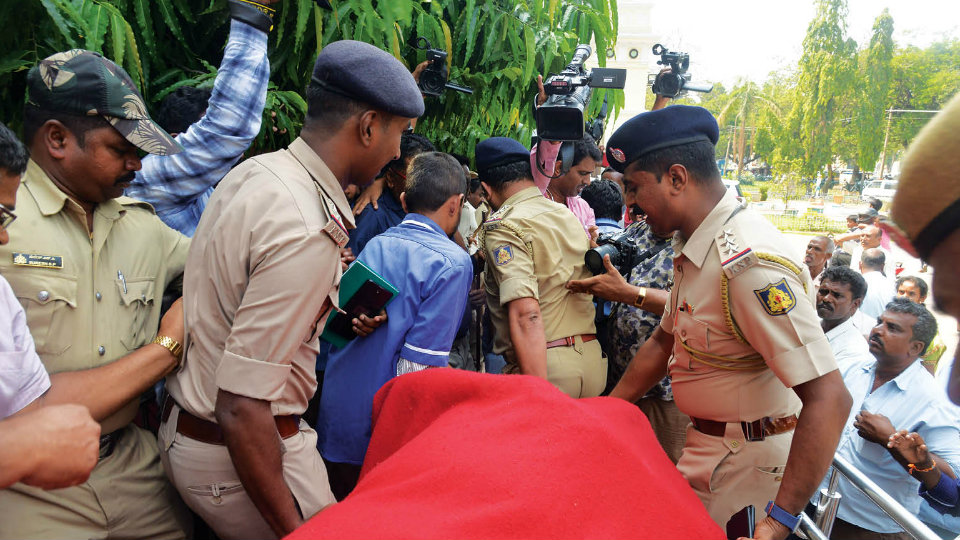 Mysore: The gangster from Punjab, who was shot dead by the City Police yesterday and his accomplices were armed and ready to kill the Police sleuths who surrounded them. This is evident in the FIR where it has been mentioned that one of the gangsters had asked his accomplice in Hindi Nikaalke Thok Daal (Remove and open fire). Fortunately, even the Police were armed and they were able to defend themselves by killing one of the gangsters.

Yesterday, Vijayanagar Police Inspector B.G. Kumar gunned down 40-year-old Sukhwinder Singh alias Durgesh, a gangster from Faridkot in Punjab after the Police intercepted him and two of his accomplices on the Outer Ring Road near Hebbal. Kumar said he acted in self-defence when Sukhwinder Singh, with a well-built body, held him tightly.

The gang had come to exchange demonetised notes (currency exchange racket) of Rs. 500 and Rs. 1,000 denominations in city. The gang used to take demonetised notes in bulk promising new legal tender to the person who had given them the banned notes. But the gang, after procuring demonetised notes, reneged on their promise and used to threaten with guns and lethal weapons.

Inspector Kumar got a tip off yesterday morning at 8 am that the gang was to come near S.V. Apartments in a locally registered Toyota Etios car (KA-09-C-6031). The informer had sent messages to the Inspector who was busy with Operation Fast Track that was launched to nab the dreaded chain-snatchers.

Before leaving his house in mufti to the location as revealed by the informer, Kumar took his service revolver as a precaution and a safety measure and this move saved his life and the lives of other Policemen involved in the operation.

The incident happened between 9.15am and 9.45am when the Police team came near the apartment and spotted the said vehicle near an un-asphalted road. The Police team surrounded the car and found a driver and the informer on the front seat and three persons seated at the back.

As soon as the Police team surrounded the car, two persons alighted from the vehicle and pushed two Policemen aside and one of them flashed his pistol and hit Inspector Kumar and Constable Veerabhadraiah with the weapon’s stock that serves as the weapon’s handle.

Sukhwinder then screamed “udao re saalonko” (blow them up) and assaulted ASI Venkatesh Gowda on his chest. Not stopping at this, Sukhwinder kicked the Constable and held him with his broad hands, suffocating the cop. He even tried to snatch Kumar’s revolver with the         other hand.

As Sukhwinder was well built, Kumar could not do much but warn the gangster to release the cop from his clutches. Sukhwinder refused to comply and tried to assault the Inspector and the cop he was holding. This scuffle went on for some time and the gangster was flashing his gun in a threatening way. Realising that there is no way he could free the cop from Sukhwinder’s arms, Kumar opened fire at him in self-defence. Sukhwinder was hit on the chest and he died on the way to K.R. Hospital.

One of the gangsters, seeing Kumar open fire, took to heels and he asked his accomplice in Hindi Nikaalke Thok Daal before running away. The other gangster too escaped from the scene. Sukhwinder was so heavy that the Police had to take the help of local residents to shift him to an ambulance. Seven people had to lift him into the vehicle.

From Faridkot, not Mumbai

Initially, the Police could not establish Sukhwinder’s identity as except for the phone number he was using, the Police did not have any evidence and there was nothing in his clothes to reveal the identity. Preliminary screening had indicated that the gangsters were from Mumbai. Later, the Punjab connection emerged.

When Police checked the phone number the gangster was using on different caller ID platforms, three names surfaced with the last name ending with Singh. Finally, the Police got his name and identity and contacted his sister and uncle through Punjab Police. They confirmed it is Sukhwinder’s mobile number.

As the news of shoot-out spread, senior Police Officers including City Police Commissioner K.T. Balakrishna, Southern Range IGP Umesh Kumar, In-charge SP Dharmendra Kumar Meena, Intelligence Wing SP B.T. Kavitha, DCP M. Muthuraj visited the spot and K.R. Hospital. Officers said investigations will be conducted as per the guidelines issued by the Supreme Court and the National Human Rights Commission (NHRC) with regard to death during Police encounters. High alert has been sounded across the city to trace the two gangsters and their local contacts. Information has also been passed on across the State for the check-posts to be on high alert.

Vijayanagar Police have filed an FIR based on a complaint by Inspector Kumar. Sukhwinder and his two accomplices under Indian Penal Code (IPC) and The Arms Act 1959 and IPC Section 307 (attempt to murder), Section 353 (Criminal force to prevent Government servants from discharging duties), Section 34 (Acts done by several persons in furtherance of common intention), Section 97 (Right of private defence of the body and of property) and Section 100 (when right of private defence of body extends to causing death) and Section 25 of Arms Act (Punishment for certain offences).

2 COMMENTS ON THIS POST To “Shoot-Out: Gun carried for safety saved cops’ lives”