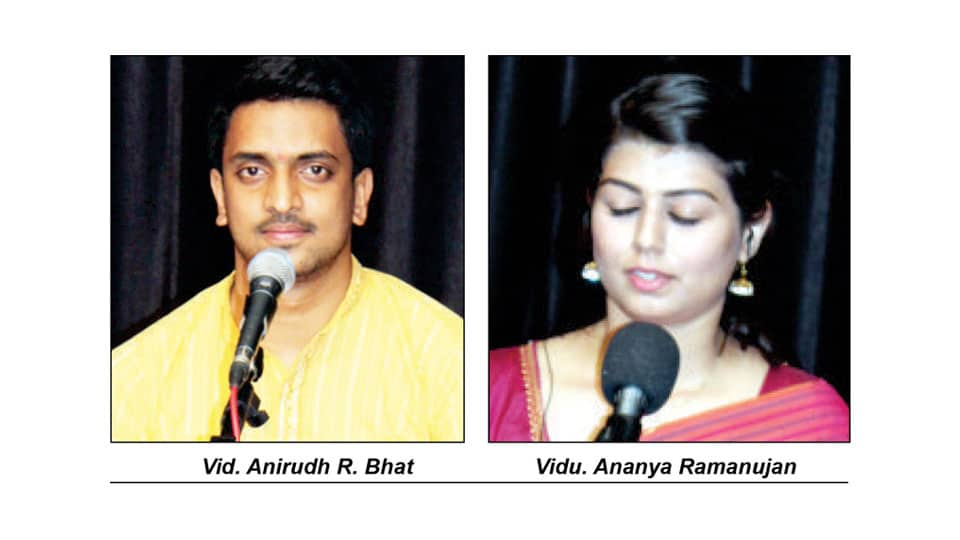 The third online concert under the special series, “Yuva Sangeetha Sambhrama – 2020” of Sri Thyagaraja Sangeetha Sabha Charitable Trust, Mysuru launched in October, was rendered by Vid. Anirudh R. Bhat and team and was premiered on Sabha’s YouTube channel on Nov.7.

Having had his initial training in music by Vid. Ramabai of Mandya, Anirudh is now shaping his talent under the tutelage of senior musician Vid. Bellary M. Raghavendra.

The next composition was of Mysuru Vasudevacharya, ‘Pranamamyaham’ in Raga Gowla and Aditala, with neat kalpanaswaras, followed by Shyama Shastry’s ‘Biranavaralichi’ (Raga Kalyani, Trishranade Aditala), with ragalapana. Both these krithis came up beautifully. The concluding presentation of the concert was the popular slow paced composition of Thyagaraja, ‘Kaddanuvariki’, in Raga Thodi and Aditala. Anirudh succeeded in enthralling the audience with his ragalapana and swaraprastara embodied with bhava in his rendition.

The fourth concert of the series premiered on Nov.28 was presented by Vidu. Ananya Ramanujan and team.

Ananya hails from a family of musicians and is the daughter of Mysuru’s popular percussion artist Vid. G.S. Ramanujan. She is the disciple of her aunts and senior musicians, Vidu. G.S. Kamala – Vidu. G.S. Rajalakshmi, the siblings popularly known as ‘Mysuru Sisters’.

Ananya began her concert with Jayachamaraja Wadiyar’s composition, ‘Saraswathi Bhagavathi’, in Raga Hamsavinodini and Mishrajhampe Tala and took up the short composition, ‘Vishalakshi’ of Muthuswami Deekshitar in Raga Panthuvarali and Mishrachapu Tala as the next item. The Raga Panthuvarali was nicely and briskly portrayed by the vocalist, besides embellishing the krithi with neraval and kalpanaswaras.

The last item of the concert was ‘Maa Jaanaki’ (Raga Kambhoji, Aditala), a popular composition of Thyagaraja, which was also elaborated with ragalapana, neraval and attractive kalpanaswaras and proved her delightful manodharma.

The concert concluded with a composition of Purandaradasa, ‘Neene Gathi Neene Mathi’ in Raga Sumanasaranjini and Khandachapu Tala.

Talented artistes Vidu. C.V. Shruthi on violin, Vid. Raghunandan Bhargava on mridanga and Vid. T.N. Ajay on ghata, who enhanced the elegance of the concert by supporting the singer with matured manodharma and brilliant performance, deserve appreciation.

Both the vocalists are gifted with attractive voices and are lucky to be under the tutelage of senior gurus from acclaimed lineage of music. Dedicated practice of the art will take them to greater heights.