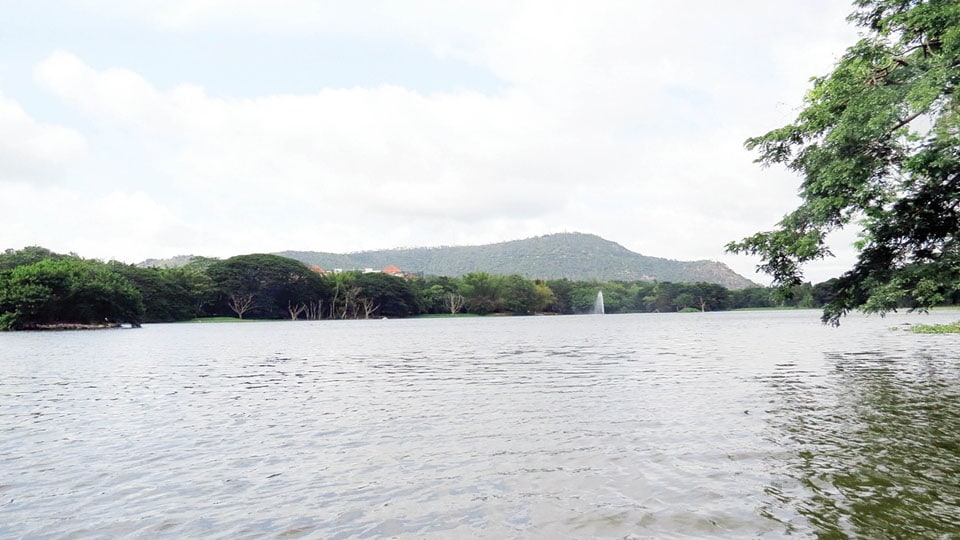 Mysore/Mysuru: The city of Mysuru has always been known to be among the greener and better planned cities of India. The greenery and water bodies surrounding the city have always been subject of research and also conservation. But of late, the number of water bodies in and around the city has dropped to 34 from 72.

“In Nanjangud, the banks of River Kapila, the number of lakes has fallen to 14 from 28. Lakes of Mysuru are disappearing for various reasons, primarily encroachments,” said Water Conservationist U.N. Ravi Kumar.

He was speaking on the topic ‘Lakes in Mysuru’ during an interaction organised by Mysore Grahakara Parishat (MGP) recently where he cited a report from EMPRI (Environmental Management and Policy Research Institute) that warned against the potential health risks to human lives as a majority of the water bodies in Mysuru and Nanjangud are contaminated.

The EMPRI report ‘Evolving Sustainable Conservation Strategies for Water bodies of Mysuru-Nanjangud Local Planning Area’, released four years ago states that a majority of water bodies are affected due to encroachment, unabated inflow of sewage and dumping of solid waste. It recommends checking discharge of effluents to water bodies and calls for immediate attention to conserve them.

“Kukkarahalli Lake, spread across 49 hectares in the heart of the city is in need of immediate attention for stopping entry of sewage. The main source of freshwater to the lake is Poornaiah Canal. The Mysuru City Corporation, the University of Mysore and the district authorities have the collective responsibility of maintaining and safeguarding this lake,” he noted.

The many Rajakaluves or storm water drains, which are also the main source of water to Kukkarahalli Lake, have been encroached upon at several places. No action has been taken to clear the encroachments. “Facing shortage of funds, the University has not done much to protect the lake and therefore the district authorities must provide funds for safeguarding the water body. The lake ecosystem was disturbed due to desilting of fertile soil from the banks,” Ravi Kumar said.

A report from the National Institute of Engineering (NIE) claimed that water from as far as Bommenahalli Lake, which is about 21 km from the lake, joins Kukkarahalli Lake. EMPRI study has suggested reduction of anthropogenic pressures in lakes and to restore and conserve the lakes by seeking cooperation from the people and also by motivating citizens about the importance and benefits of maintaining the lakes, he noted.  Karanji, Lingambudhi Lake

Diverting his attention on Karanji Lake, Ravi Kumar said that the scenic lake under the control of Mysuru Zoo has been also encroached upon, including the portions of Rajakaluve that brings fresh water to the lake. “Karanji Lake precincts have tall trees where migratory birds roost. Three years ago, This lake had dried up fully and desilting was done to deepen the lake for impounding more rainwater,” he added.

Some portions of Lingambudhi Lake area that extended up to 3.6 hectares were acquired for the purpose of constructing the Outer Ring Road and a few layouts too have encroached upon the lake area. The sewage flow into the lake has not been addressed fully, he said.  “The lake conservation and rejuvenation is a slow process that may require sustained efforts over a long period of time with continuous monitoring, repeated data collection, regulation of encroachment and pollution analysis with appropriate action. The conservation strategies suggested are lake-land protection, pollution control, lake restoration, community participation and legal framework,” he added.

“The lakes that existed in Mysuru in 2001 started disappearing and their number dropped substantially by 2011 due to frequent encroachments. We need a holistic plan and that must be implemented on a war-footing based on the scientific inputs. Continuous monitoring and executing conservation strategies to free lakes from encroachments, dumping of garbage and building debris, discharge of effluents is the need of the hour,” Ravi Kumar opined.