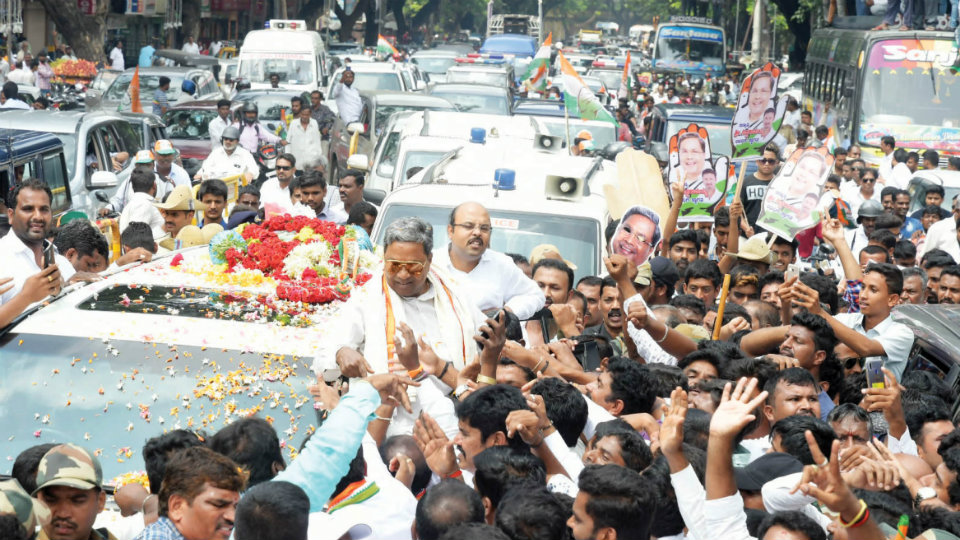 Mysuru:  Former Chief Minister Siddharamaiah, who arrived in city for the first time after being elected as the Leader of Opposition, was accorded a grand welcome by City and District Congress Committee this morning.

At first, Siddharamaiah was received by Congress workers at the Columbia Asia Hospital junction on Mysuru-Bengaluru Road. From there he was taken on a procession till the Old RMC Circle in Bannimantap.

On arriving at the Old RMC Circle, the former Chief Minister was taken in a procession on an open vehicle till the City Congress Office near City Railway Station on JLB Road. The procession, accompanied by folk troupes including Puja Kunita, Kamsaale, Pata Kunita and others, passed through Nelson Mandela Road, Sayyaji Rao Road before culminating at the Congress Office.

The procession route was jam-packed with thousands of Congress workers and Siddharamaiah’s supporters who showered flower petals on their leader. Meanwhile, City Police had provided security at the Congress Office and surrounding areas were Siddharamaiah was to deliver a public speech.