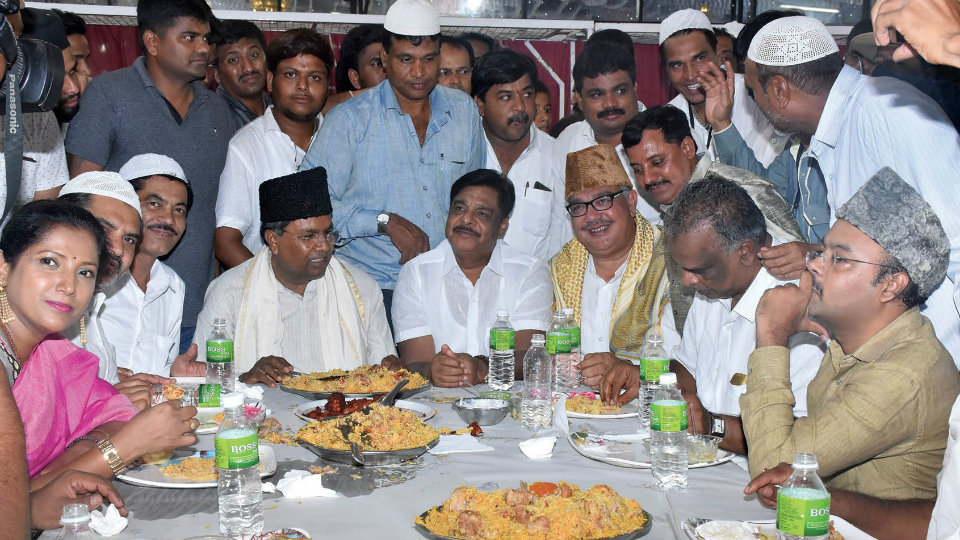 Mysuru:  For a few hours, former Chief Minister Siddharamaiah chose to forget about the Congress débâcle in the Lok Sabha elections and chose not to criticise Prime Minister Narendra Modi like he persistently does whenever he gets an opportunity to do so. The occasion was an Iftaar party organised in city last evening where Siddharamaiah mingled freely with Muslim brethren to share food and happiness.

The mega event was organised at Prestige Convention Hall on Mysuru-Bengaluru Highway where thousands of community members and others had gathered. Donning a traditional tubeteika (a black velvet cap), Siddharamaiah sat with the community members to break the fast. He even served aromatic Biriyani to the people seated around him and many were eager to get a serving from the former CM.

Though there were thousands of people at the convention hall, Siddharamaiah was the centre of attraction. With his friendly gestures, he asked the people to celebrate the festival in the name of God and said that he participated in such occasions to promote universal brotherhood.

Speaking to reporters, Siddharamaiah said that he had come to the convention hall where members of all communities were celebrating the festival. “This is an occasion to spread the message of peace and universal brotherhood and social harmony. I do this every year and I pray for the well-being of all sections of the society,” he said.