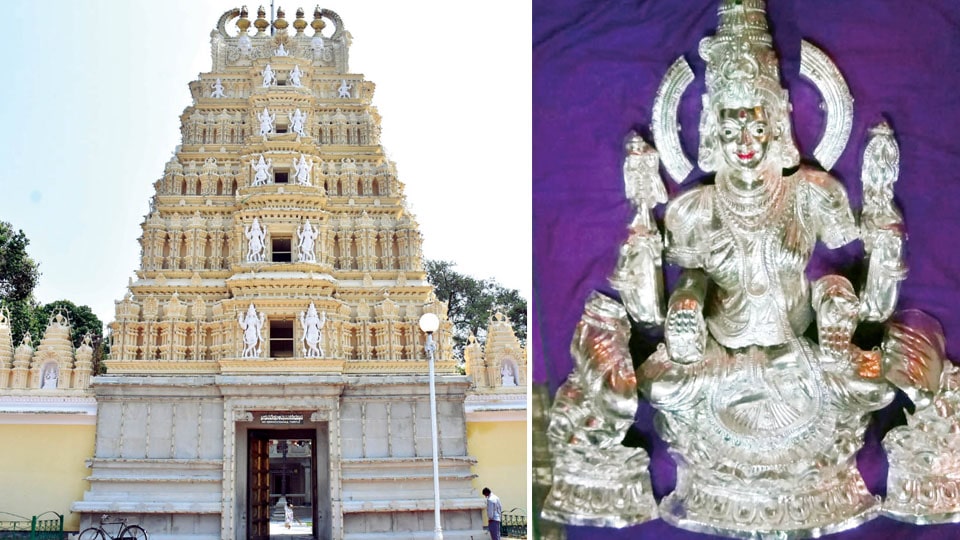 Mysore/Mysuru: It was just a casual visit of Swami Suryapada of Art of Living with others to Sri Bhuvaneshwari Temple situated within the premises of Mysore Palace a few months ago.

Soon after coming out of the temple, the Swami just said one sentence, “We have to present a Belli Kavacha (Silver Kavacha or Silver Armour) to the black stone idol of Goddess at the earliest.”

One among them who was present with the Swami was Channakeshava from Mysuru. This information was circulated among the staunch devotees of the Swami and Art of Living Foundation and funds started pooling in. They had planned to present this Kavacha to the temple authorities on May 13 which happens to be the birthday of  Sri Ravishankar Guruji but it did not happen due to the sudden outbreak of Corona.

Channakeshava told Star of Mysore that Swami Suryapada, who belongs to Bengaluru, has a lot of followers. His wish of presenting the Silver Kavacha to Goddess Bhuvaneshwari, also revered as ‘Kannada Mathe’, was considered as sermon by his devotees. An artist from Chamarajendra Academy of Visual Arts (CAVA) was assigned to take measurement of the idol and prepare an estimate to know how much silver was required for this filigree work. It was estimated that it required around 12 kg silver ingot. The CAVA artist only charged for the labour and did not take other expenses.

Since the temple belonged to Muzrai Department, the Swami and his devotees approached the officials concerned explaining their intentions of donating the Silver Kavacha to Goddess Bhuvaneshwari.

At that time, Yathiraj Sampath Kumaran, who is the Executive Officer of Sri Chamundeshwari Temple and Chandramohan, another officer belonging to Muzrai Department, extended all help to them.

It took a few months for the artist to prepare the kavacha. Finally, it was handed over to Swami Suryapada which was placed on the idol  of the Goddess and special rituals held. It was decided to officially  adorn the Goddess on Nov.1 to coincide with Kannada Rajyotsava celebrations.

T.S. Subramanya, Deputy Director, Mysore Palace Board, said the Temple of Bhuvaneshwari is located on the Northern side of the Palace corresponding to the Varahaswamy Temple in the South, thus providing a symmetrical structure in the Fort complex. It was constructed by Sri Jayachamaraja Wadiyar in the year 1951. The Temple tower is in typical Dravidian style. The principal deity Bhuvaneshwari was carved by the famous architect-sculptor, Shilpi Siddalingaswamy of Mysore. One of the important objects in the temple is a copper Surya Mandala which is said to have been transferred from the Palace to this temple by Jayachamaraja Wadiyar.