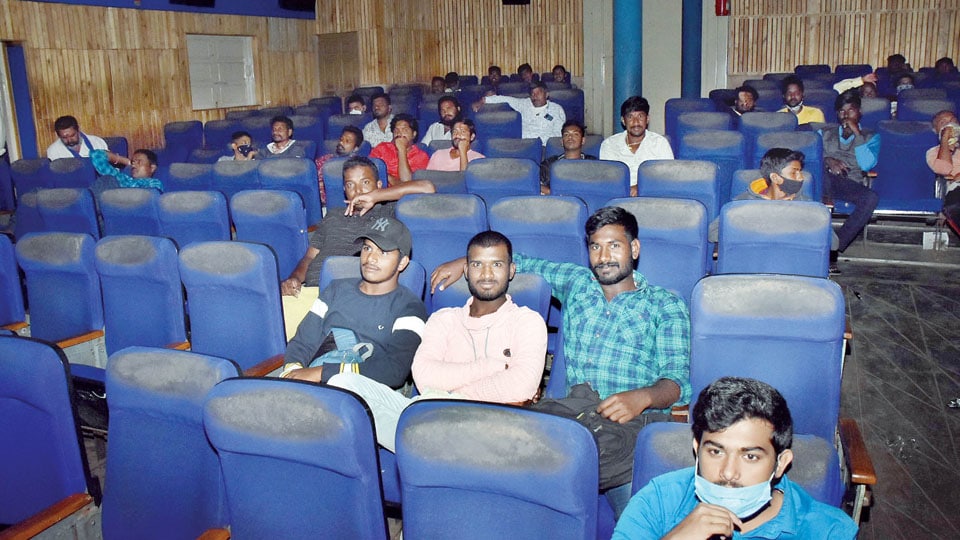 Reason: No clarity in fresh guidelines; No new releases

Mysore/Mysuru: Even as the Ministry of Home Affairs (MHA) has given relaxation over the capacity in cinema halls and throwing open swimming pools to general public with revised Standard Operating Procedures (SOPs), city theatre owners are unlikely to open their business premises for some more days citing lack of clarity in new guidelines.

The MHA released a fresh set of guidelines last week extending curbs on certain activities till Feb. 28, thanks to decline in COVID-19 cases in all States and Union Territories. Accordingly, it has allowed increase in audience capacity at single screen theatres and multiplexes. Currently, only 50 percent of the seating capacity is allowed. However, the fresh rule was not clear on the quantum of increase in capacity.

M.R. Rajaram, Secretary, Mysuru Film Exhibitors Association, told SOM that the MHA was not clear on the quantum of increase in audience capacity. None knows whether it is 10 percent, 20 percent or full capacity. Without clarity it was not possible to decide on opening single screen theatres. “We don’t know about the new SOPs and how simple or stringent it is. Let MHA come out with clear SOPs as we need to spend extra on hand sanitisers and sanitisation of Cinema Halls after each screening.”

He opined that it was like a Catch-22 situation. People would not come to cinema theatres without new film releases of popular stars. The film producers were not ready to release new movies without allowing 100 percent capacity. The Government of India was slowly opening the entertainment zones as and when the Corona situation improves. Ultimately, it was single screen and multiplex owners who were facing problems.

READ ALSO  ‘Pandemic’ is 2020 Word of the Year Other words are ‘quarantine’, ‘lockdown’

On one hand, the audience was not coming to theatres and on the other hand each cinema owner has to pay a tax of Rs. 31 lakh annually. In the current situation, it was not possible to think about paying so much tax when ticket collection has been negligible, he added. “Our demand for waiving certain taxes due to COVID-19 pandemic is still pending before the State Government. Our industry requires the Government’s support to recover from the huge loss suffered due to closure of cinema halls for over 10 months,” he said.

It may be mentioned here that hardly a few single screen theatres have re-opened since last two months in city, which are screening old Kannada movies and new movies of other languages. But the turnout of people to movie halls has not been encouraging yet due to the prevailing threat of the contagion.