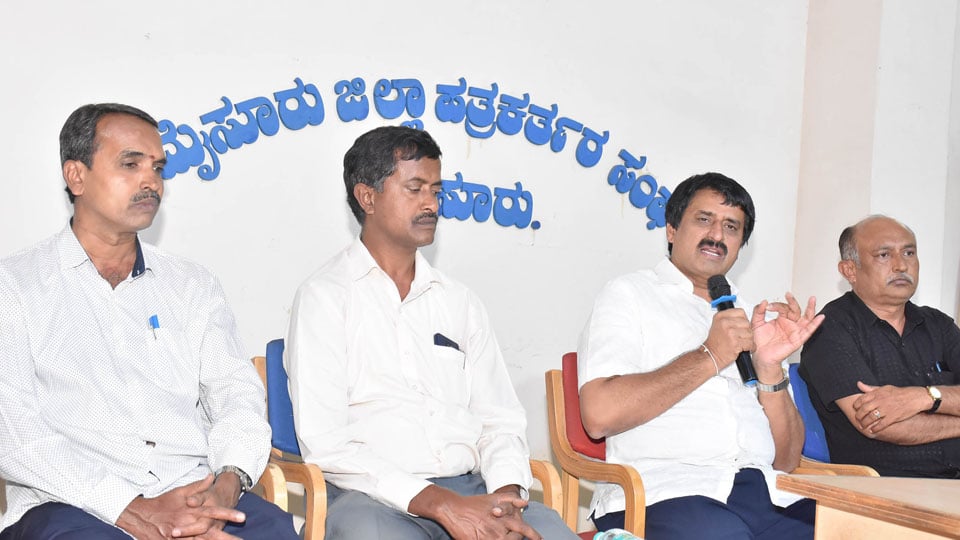 Mysore/Mysuru: One ticket, many tourist destinations — the concept of providing access to multiple tourist destinations in and around Mysuru using a single ticket will become a reality soon and this common ticket is expected to end long queues outside ticket counters and will also help prevent fleecing of tourists at parking lots, said Minister for Tourism C.P. Yogeeshwar.

He was participating in an interactive meeting organised by the Mysuru District Journalists Association (MDJA) at Pathrakarthara Bhavan in city last afternoon. Instead of buying tickets at every spot, visitors can purchase one ticket or the City Pass that will allow them to enter multiple destinations such as the Mysore Palace, Mysuru Zoo, Karanji Lake Nature Park, Chamundi Hill, St. Philomena’s Church, Lalitha Mahal Palace, Railway Museum and Brindavan Gardens, he said.

“I am holding discussion with stakeholders and the single ticketing system will add to the concept of Brand Mysuru and will go a long way in promoting the city as tourist-friendly place,” he said and noted that issues like revenue sharing with different departments and agencies would be sorted out before the scheme is announced.

He said that Mysuru Tourism will be developed in a big way and a series of programmes will be organised all through the year at Mysore Palace premises to attract more tourists instead of restricting them only during Dasara. “An annual timetable for cultural activities has been prepared and programmes will be held between 4 pm and 10 pm. The nature of the programmes will be finalised after discussing with historians, writers and prominent personalities in the cultural field,” he explained.

READ ALSO  Each district’s USP will be branded to boost tourism: Minister

Continuing, Yogeeshwar said that the State Government was keen on modernising Brindavan Gardens and take forward the theme park concept on the lines of Disneyland pro-posed by the previous Government. “The project will be taken up under a Public-Private Partnership (PPP) model soon and the State Government will not spend any money on it. I have seen the Power Point presentation made by the architects and engineers. The project is an extension of Brindavan Gardens and it will be taken up without harming the KRS Dam,” he added.

Diverting on the tourism development in the heart of Mysuru city, the Minister said that a ropeway will come up at Chamundi Hill and the State was implementing ropeway project at Nandi Hills too.

On the opposition by environmental groups against Chamundi Hill, Yogeeshwar said, “I am aware of the opposition and let me make it clear that the ropeway will not lead to any environmental damage as only a cable will be drawn and a few poles will be erected. The ecological damage can be prevented with the help of modern technology and we are already in the process of discussing the project with a couple of agencies including the ones from our own country,” he added.