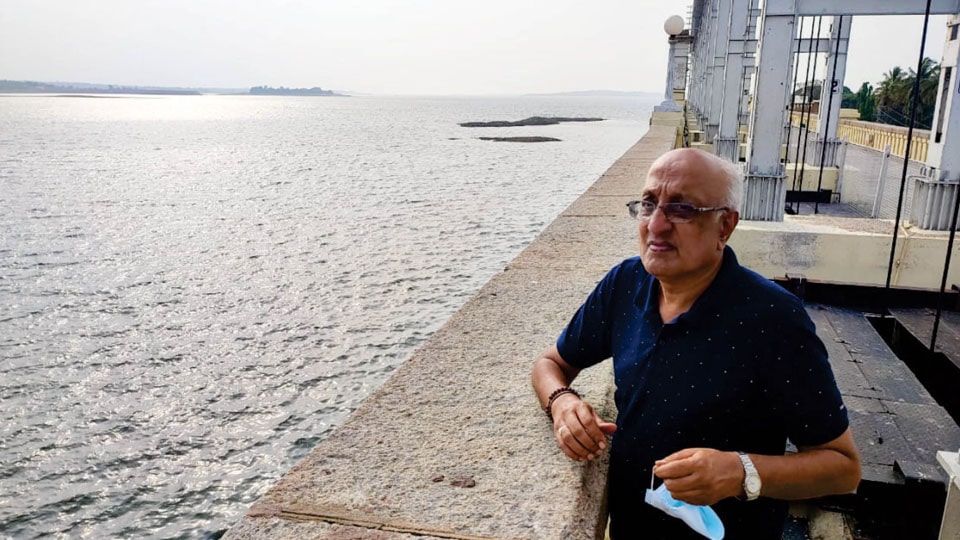 Srirangapatna: The family members of Bharat Ratna Sir Mokshagundam Visvesvaraya (Sir. M.V.) were touched to hear from the officers manning the Krishna Raja Sagar Dam (KRS) in Mandya that people of Mandya worship Sir. M.V. and Nalwadi Krishnaraja Wadiyar every day as they have transformed their lives by giving them a permanent source of water that brought prosperity to their once barren lives.

The family took information from the officers about the sluice gates that were designed from scratch by the great engineer.

Sir M. Visvesvaraya had refused to accept royalty from the then Government for his automatic sluice gate design technology so that the money could be used for public welfare.

After going around the Dam, the family visited the backwaters and the Brindavan Gardens. Collecting information from the officers, the family learnt about how the gates that were built decades ago are being maintained now.

In 1924, Sir M.V. oversaw the construction of his design for the Krishna Raja Sagara Lake and Dam, creating the largest reservoir in India at the time, which provided drinking water for several cities and entire Tamil Nadu.

Mokshgundam Satish said that while the Mysore Wadiyars — Nalwadi Krishnaraja Wadiyar and his family in particular — pooled in their hard-earned resources for the Dam construction, his great-grandfather had pooled in engineering expertise and the technology that was considered the most advanced over 100 years ago.

“Remarkably, the Dam still stands strong and the sluice gates still are efficient and this demonstrates how public works were carried out in absolute perfection without even a small deviation,” Satish said. He added that the Government has befittingly decided to install the statues of Nalwadi Krishnaraja Wadiyar and Sir M.V. at the South Gate of the KRS.

Raised in a village of Muddenahalli, Sir M.V. was known to study under street lamps, walk over 60 kilometres to Bengaluru to attend United Mission School and eat food served at temples. Today the modest house where he was born is considered a place of worship for locals.