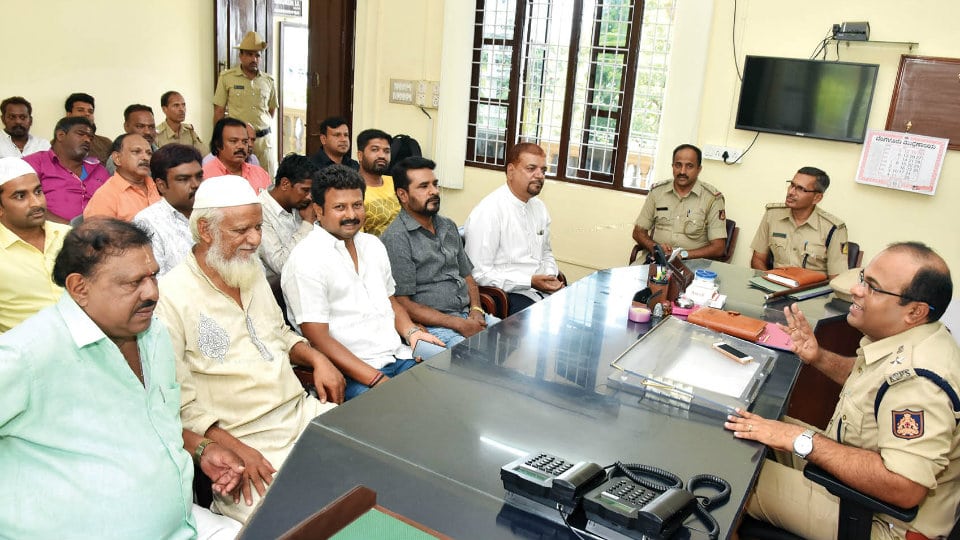 Mysuru: A minor argument between the owner of a non-vegetarian hotel and a cloth shop owner from two communities resulted in group clash at Chikka Market in Mandi Mohalla late last night. Six persons have been arrested in this connection and the Police have successfully diffused the situation. Elaborate security measures are in force in the area.

Speaking to Star of Mysore this morning, City Police Commissioner K.T. Balakrishna said that last night at around 9.45, an argument broke out between the owner of a non-vegetarian hotel at Mandi Mohalla and the owner of a cloth shop next to the hotel.

It is a long-standing issue between both of them and in the past too they have fought over petty issues and many times Police have intervened to pacify the warring duo. Yesterday too, tension prevailed in the area as both of them resorted to war of words, said Balakrishna.

Soon, a crowd assembled in the area and some people indulged in group clashes. Two persons were injured in clashes. Mandi Inspector Arun Kumar rushed to the spot and diffused tension. Later, the warring parties were summoned to the Police Station and six persons were arrested at around midnight.

Commissioner Balakrishna and DCP (Law and Order) M. Muthuraj visited the area and the Police Station and asked the communities to maintain peace. Today morning too, a peace meeting was held at the office of the Assistant Commissioner of Police Station to cool tempers.

The peace meeting was chaired by ACP Dharanesh and attended by the warring parties, former Corporators and community leaders Ramani, Vasu, Nazaruddin Babu and Iliyaz.

The hotel owner and the cloth shop owner were asked to maintain peace.