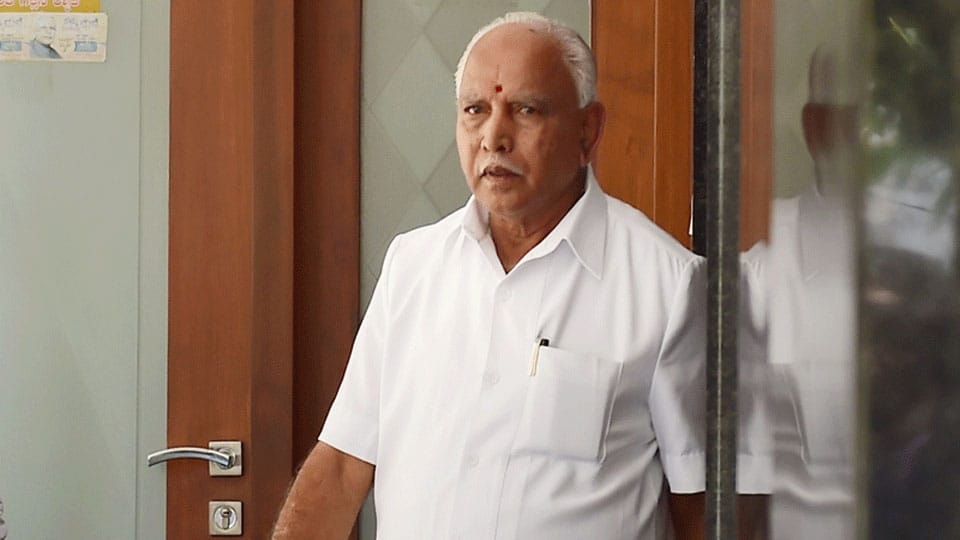 Upbeat BSY to meet BJP MLAs, MPs on May 24

Bengaluru: Buoyed over the exit polls that projected big win for the BJP in the Lok Sabha elections in Karnataka, Opposition leader in the Legislative Assembly B.S. Yeddyurappa (BSY), who is also the BJP State President, has convened a meeting of the newly elected BJP Lok Sabha candidates along with party MLAs on May 24, a day after the counting of votes polled in the recently concluded General election will be taken up.

According to party sources, Yeddyurappa earlier had planned to convene the meeting on May 21. However, it was postponed to Friday.

Almost all the exit poll surveys had given a substantial number of Lok Sabha seats for the BJP in Karnataka, predicting the party to bag between 18 to 25 seats out of a total of 28. This is in contrast to likely outcome even after coalition partners Congress and the JD(S) united fight and were given to win a mere 3 to 10 seats. This was far less than predictions.

According to top BJP sources, if the Congress-JD(S) combine failed to get reasonable number of seats, the fall of the coalition government would become ‘imminent’ as many Congress MLAs, who are sitting on the fence, are likely to jump over to the BJP and cause the collapse of the one-year-old JD(S)-Congress Government.

Yeddyurappa, who had led the party’s election campaign in Karnataka, had consistently claimed that the party would win at least 22 seats. He had held several meetings with his close confidants and working out strategies to form the government in Karnataka, in the event of the collapse of the coalition government, sources told UNI.

Meanwhile, dissident Congress MLA and former Minister Ramesh Jarakiholi, who had allegedly vowed to pull down the coalition government, is also camping in Bengaluru and holding secret talks with Congress MLAs supporting him.

According to party sources, Ramesh, who had already announced that he would take a decision to resign to the Assembly seat after the Lok Sabha elections, may help BJP trigger collapse of the State Government, by resigning to his Gokak Assembly seat he is representing and asking his follower legislators to follow the suit. It was alleged that Ramesh has at least three Congress MLAs, who are close to him, the sources added.