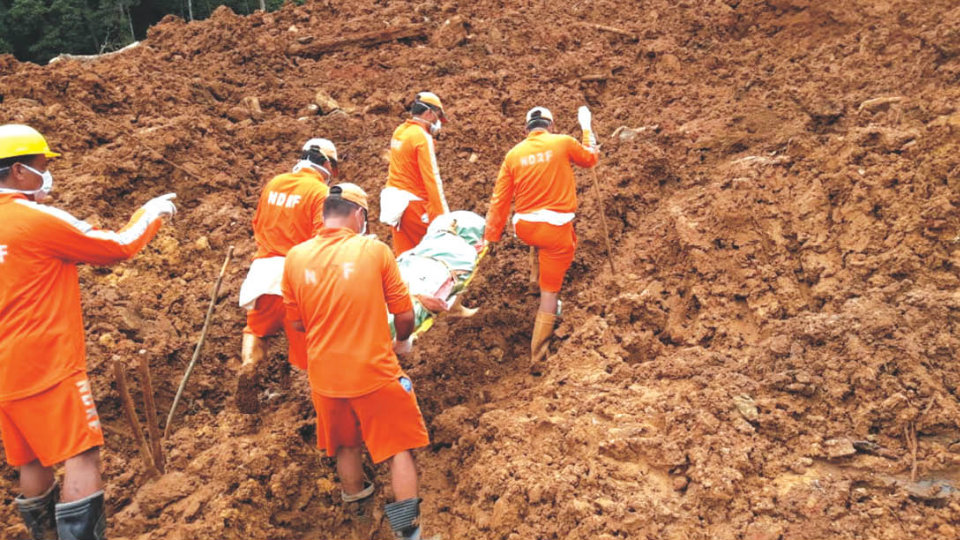 Madikeri: The death toll in the huge landslide at Thora village in Virajpet taluk bordering Kerala has risen to six, with the discovery of the body of a 55-year old woman on Thursday. The deceased woman has been identified as Leela (55), wife of one Appu.

Ten persons had gone missing after the massive landslides triggered by heavy rainfall that took place at Thora village coming under Kedamullur Gram Panchayat on Aug.9.

Following the landslides, the NDRF and other rescue teams traced the bodies of five persons trapped in mounds of mud on different dates.

On Thursday, the NDRF team led by Commandant Udaykumar Dikshith, accompanied by more than 30 personnel, continued the search operation, when the team found Leela’s decomposed body 30ft. deep inside the mud.

Appu and Leela couple lived in the line house in the estate of Keetiyanda Mandappa Agastya. The couple were among the 10 who went missing after the massive landslide at Thora on Aug.9. Later on, the bodies of Mamatha, Likhita, Anasuya, Shankara and Appu who were trapped under the mud, were discovered on later dates.The rescue team is continuing its search for the bodies of Devakki, Amrutha, Aditya and Veena, who are presumed to be dead.

Meanwhile, the death toll due to floods in Kodagu district touched twelve on Thursday.

The post-mortem of the body of Leela was performed at the Virajpet Government Hospital following which it was handed over to relatives.

Kodagu Kodagu floods
Chidambaram to sleep on wooden cot in Tihar once CBI custody ends
15,000 bulbs in Mysore Palace to be replaced