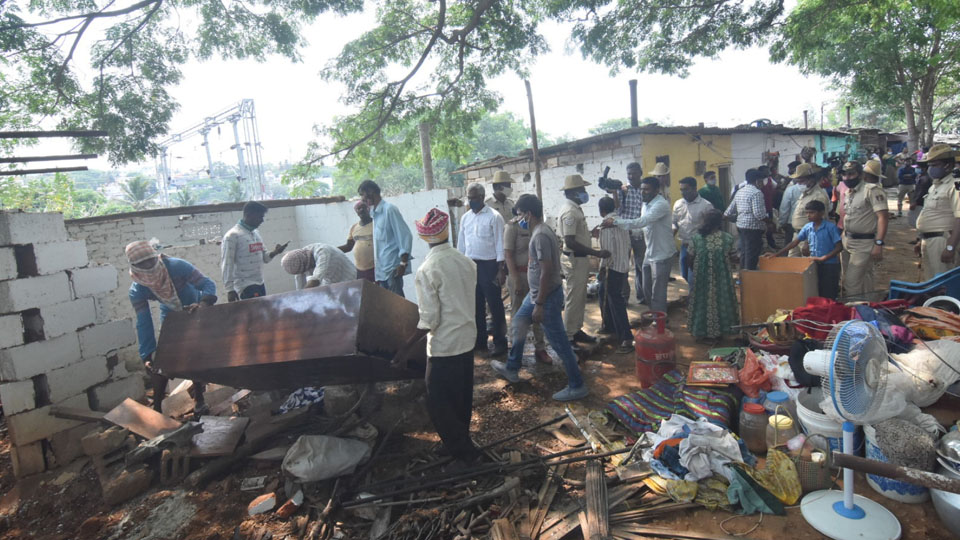 Mysore/Mysuru: Despite opposition from slum- dwellers near the Arasikere Railway track at Yadavagiri in MCC Ward. No. 18, Karnataka Slum Development Board officials, led by Executive Engineer G. Harish and with security from the Police, commenced demolition of illegal slum houses this morning.

The slum-dwellers, who opposed the demolition drive, alleged that the houses allotted to them in Survey Numbers 484/1 and 484/2 at Kesare and built under JnNURM, lacked basic

facilities such as water and power. Though wordy duel ensued between the residents and officials, the Slum Board officials under tight Police security provided by V.V. Puram Police, commenced the demolition drive.

Executive Engineer Harish said that there are a total of 78 zinc sheet roofed houses built near the Railway track in Yadavagiri, out of which 28 families have obtained a Stay Order from the High Court against shifting them. “We are not touching those 28 houses, but we are razing the remaining 50 houses. On Jan. 31, 2021, houses (flats) built under JnNURM at Kesare were allotted to these 78 beneficiaries through lottery system. All basic facilities have been provided and time was also given to them to shift to their allotted houses. Out of 50 houses that are to be demolished, 20 families have already moved to their new houses at Kesare. If there were no basic facilities, these 20 families would not have moved there and as houses have been allotted to them, we are demolishing the 50 houses using an earth-mover,” Harish added.

It may be recalled that MP Pratap Simha and Chamaraja MLA L. Nagendra had allotted house numbers through draw of lots to beneficiaries of JnNURM (Jawaharlal Nehru National Urban Renewal Mission) houses.

The draw of lots was held for allotment of house numbers to families living in the slum adjacent to the Railway track passing through Yadavagiri and slum-dwellers of Saw Mill area at Bamboo Bazar, for whom the Karnataka Slum Development  Board had built houses under JnNURM scheme at Kesare Survey Nos. 484/1 and 484/2.