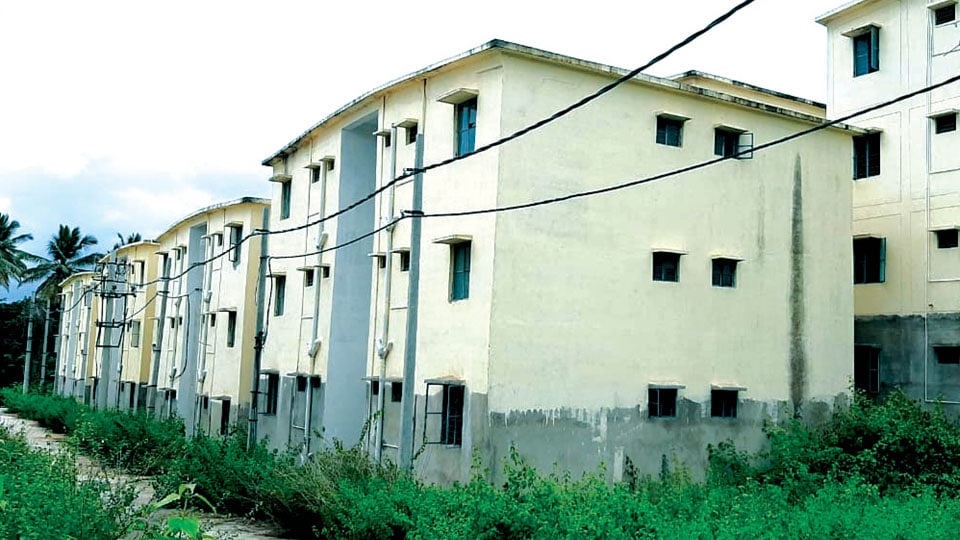 Slum Board houses on Naguvanahalli Road lying vacant for years

Mysore/Mysuru: As a glaring example of Government apathy, more than 200 Slum Board houses built on Naguvanahalli Road in the outskirts of the city have been lying vacant for years.

The Karnataka Slum Development Board had built multi-floor residential complex having 252 houses on Naguvanahalli road off the Ring Road in 2014 at a cost of Rs. 6 crore under JnNurm Scheme. The houses were meant for distribution among slum dwellers and other poor people. But as the Board has not bothered to distribute them, it seems that the very purpose of their construction has been defeated even as the poor await shelter with eagerness and anxiety. The Slum Board which took up the construction in 2014, completed the housing project in 2016 and thereafter seems to have forgotten about it. After failing to allot the 252 constructed houses, the authorities have also failed in maintaining them, which has led to the deterioration of the houses. As the houses are left in the lurch, weeds, bushes and plants have grown up in the vicinity posing a hazard to nearby residents. With no one to take care of these houses, windows, doors, tiles and other materials have gone missing. The authorities have remained quiet after locking the houses. Not to fall behind, some other persons too have put another lock of their own after writing their names on the front doors.

Some people who are awaiting distribution of the houses, told Star of Mysore that the Slum Board authorities have not bothered to maintain them and as such, the condition of the houses is deteriorating with each passing day. Expressing concern that the houses may become dilapidated in the absence of any maintenance, they alleged that the authorities are indulged in looting tax-payers money in the name of constructing houses for the poor.

They also expressed concern that the multi-storeyed residential complex may go waste if the authorities do not act immediately and allot houses to deserving beneficiaries. They also alleged that the Slum Board authorities were dodging queries on the allotment of the houses.