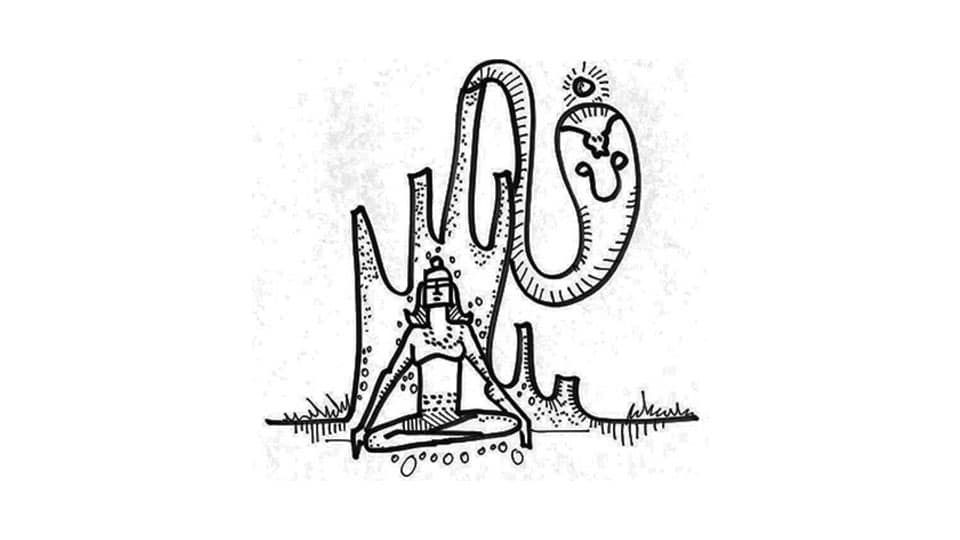 Snake in the Termite Hill

One of the most sacred images in India is the snake emerging from a termite hill. Termite hills are remarkable natural constructions. They provide ventilation and protection from flooding and predators for the termites. When the termites abandon their gigantic mounds, they are often occupied by snakes. Snakes get refuge from the heat and potential predators.

In the folk mythology of India, a serpent residing in a termite mound is an object of veneration. Men and women, seeking children and harvests, worship these mounds. The mound is anointed with sandal paste and vermilion. The snake within is offered milk as food. There are many folklore stories of Goddesses appearing near such mounds in the form of babies. They are then raised by local kings.

The mound is also seen as the entrance to Bhogavati or the land of serpents under the earth. Here, snakes with jewels on their crests live. These jewels have the ability to heal illnesses and bring fortune to those who possess it. The Naga Mani is part of many folklore. The king of the serpents is Vasukhi, his sister is Mansadevi. She cures people from snake bites. The Puranas speak of how the snakes who live under the earth are in constant battle with Garuda, who lives in the sky. In the Ramayana, Ravana’s son Indrajit is married to a snake woman. Thus, he has the power to use snake weapons. In the Mahabharata, both Arjuna and Bhima are married to snake women. Their children are considered to be great heroes.

Termite mounds are believed to form around holy men who fall into deep meditation. They are able to withstand the bite of the termite and remain unmoved. This makes the termite hill an indicator of spiritual power. Snakes are said to live on the bodies of these holy men and give them shelter from rain. In temple lore, it is said that cows shed their milk on termite hills. Sometimes, a cowherd breaks a termite hill in which he finds the image of either Shiva or Vishnu. This image is then enshrined in a temple. The idea of a termite hill giving protection to a God, such as Murugan, is also popular in folklore.

Ants and termites evoke fear and awe. We fear them as ants can infest our kitchens, while termites can eat away our houses from the very foundations. There are tales of how termites have eaten the bowstring of Vishnu and the throne of Mahiravana. So, both ants and termites are seen as manifestations of the Goddess’ rage. We admire them as they seem very organised, orderly, cooperative and relentless. To feed the ants, women used rice flour paintings at the entrance of the house and on walls. Snakes were associated with Sanjivani vidya, rebirth and immortality, due to their unique ability to shed scales and regenerate themselves. These are not Vedic traditions, but they came within the larger framework of Hindu practices.