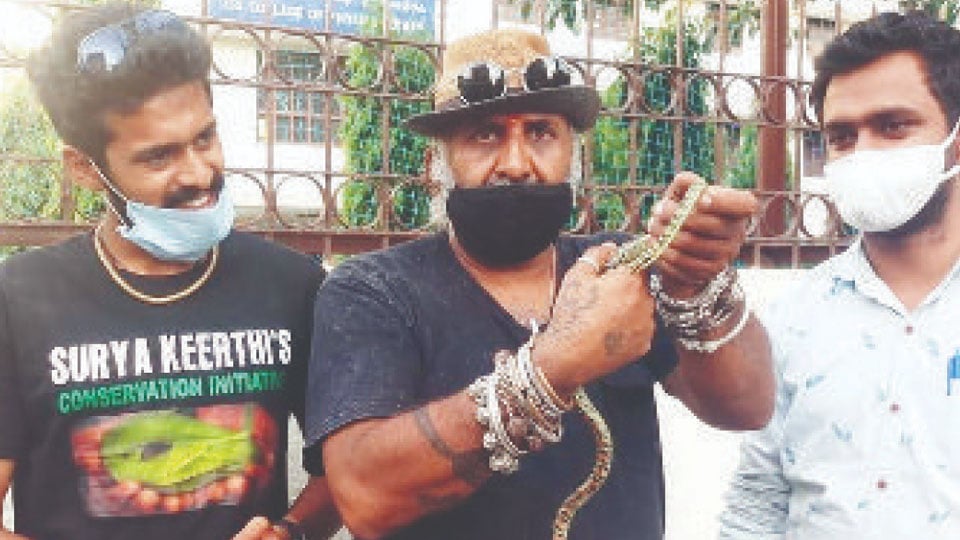 Mysore/Mysuru: City’s well-known snake rescuer and wildlife conservationist Snake Shyam along with his son Surya Keerthi, have rescued a rare Ornate Flying Snake on Ramanuja Road 4th Cross in city on Tuesday. With this, Shyam has rescued a total of 35,943 snakes so far.

Yesterday at about 4 pm, the snake crossed the busy Ramanuja Road near JSS Physiotherapy College and entered a discarded plastic pipe on the footpath which was noticed by one Naveen of Generic Medicals on the road, who in turn informed Snake Shyam over the phone. Shyam, who rushed to the spot along with his son, rescued the snake from the pipe.

Speaking to ‘Star of Mysore,’ Shyam said that the Ornate Flying Snake is found mainly in the Western Ghats and is a non-venomous snake which preys on small lizards, small birds etc. He further said that the snake may have come to the city in a vehicle when it accidentally ventured inside it and the driver of the vehicle unknowingly may have brought it to city.

After the vehicle was parked near Agrahara here, the snake may have come out of the vehicle. He said that the Ornate Flying Snake moves very fast on trees and can glide from one tree to another by flattening its body.

Ramanuja Road Snake Shyam
Complete lockdown on Sundays: Marriages to be allowed restricting number of guests to 50
Medical, Para-medical staff of Private Hospitals to be covered under COVID Health Insurance