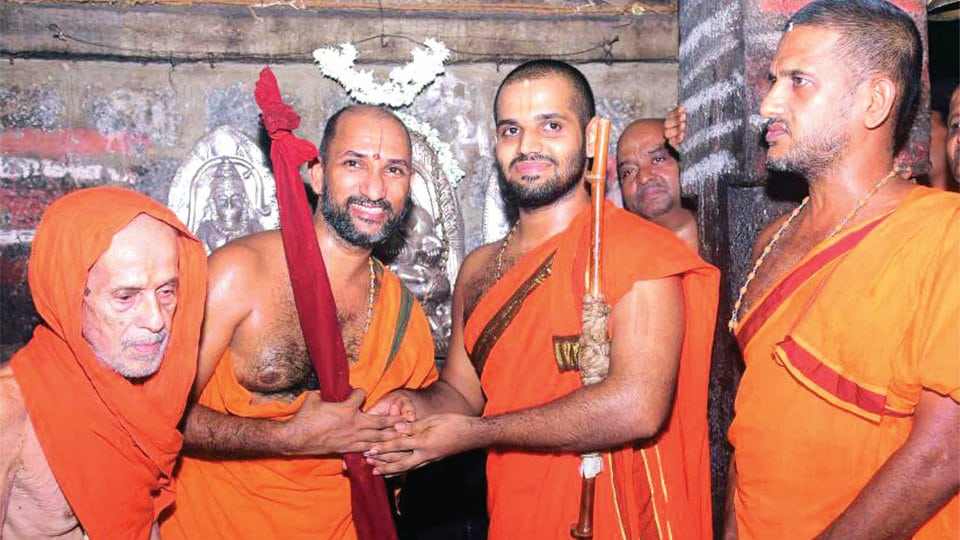 Udupi: It was a historic moment for devotees of Kukke Subramanya Mutt and Udupi Sode Mutt yesterday as the Seers of both Mutts came together to bury the feud which had prevailed for over two centuries.

Earlier, Subramanya Mutt Seer Sri Vidya Prasanna Theertha Swamiji, terming the meeting as ‘auspicious’ had said that the Mutts wanted to forget the bitterness and maintain good  relationship as both were established by Sri Madhwacharya.

The Seers, who met at Sri Anantheshwara Temple at around 9 am, held cordial talks with each other and later took part in sabha programme held at the Rajangana of Sri Krishna Mutt in the presence of Seers from various other Mutts. Both Seers also visited Sri Chandramouleshwara Temple and Sri Krishna Temple and offered special prayers seeking apology from the deities.

Speaking to mediapersons, Sri Vidya Prasanna Theertha Swamiji said that both Seers had intended to end the centuries-old-feud and looked forward to have cordial relations between both the Mutts.

The dispute between these Mutts dates back to 18th century. It is said Sri Vishwaidhi Theertha Swamiji headed the Sode Mutt from 1740 to 1753 and his younger brother Vishwadeesha Theertha Swamiji was the pontiff of Subramanya Mutt from 1753 to 1803. Once, Sode Mutt Seer was invited to attend a puja ritual at Subramanya Mutt. But the pontiff could not reach on time and Subramanya Mutt Seer went ahead with the puja rituals and that is when the differences emerged between the two Mutts, which lasted for more than two centuries.