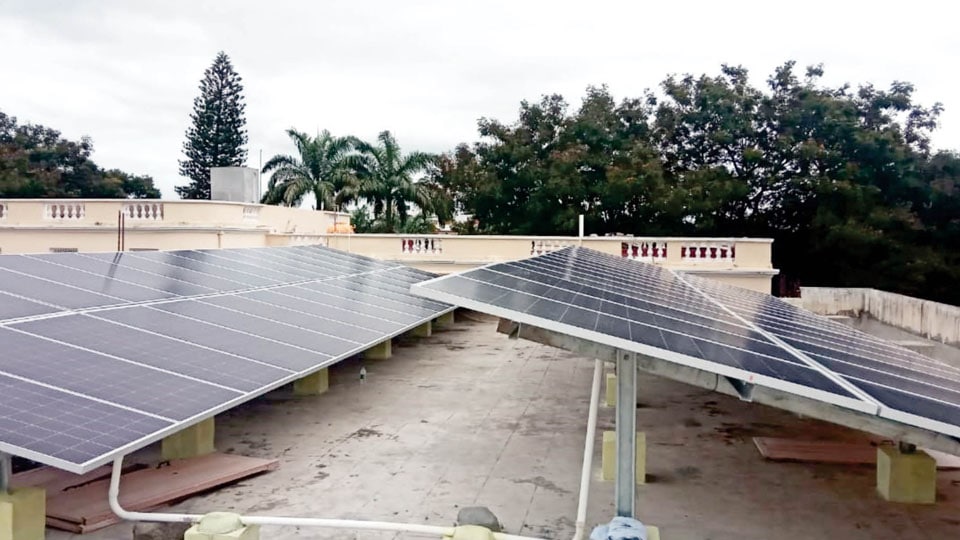 Mysore/Mysuru: As a step towards self-reliance in power generation, the Mysuru Zilla Panchayat (ZP) is installing a roof top Solar Power Unit at its premises and the works are nearing completion.

The installation of a 50 KW Solar Power unit atop the ZP office, taken up at a cost of Rs. 32 lakh is in final stage. The ZP Office consumes 38 to 40 KW power on an average every day. After the solar unit is commissioned, it can generate 200 KW power in a day. The ZP, which is paying Rs. 1 lakh a month as electricity charges to CESC, can save up to 70 percent of the bill once the solar unit starts generating power.

Barring cloudy days, the ZP will draw power from this unit, thus bringing down its  reliability on CESC to almost nil. At present, the ZP is recording an average power consumption of 38 KW on normal days and 45 KW during summer days.

Net Metering: After achieving self-reliance in power generation, the ZP plans to sell excess power to CESC, for which the ZP is preparing technical specifications through what is called as Net Metering, which enables the excess power generated to automatically connect to CESC power grid network.

Bengaluru-based Texer Solar Company has bagged the tender for the execution of the solar power project. The company started the works 20 days ago and is all set to complete the works in a few days. Apart from installation, the company is also entrusted with the task of maintenance of the unit for five years.

LED Bulbs: In another measure of saving power and cutting down on electricity bills, the ZP has planned to replace the conventional tubelights with LED bulbs. As LED bulbs are found less power consuming, they are going to replace the more power consuming tubelights shortly. There are plans to install 300 LED bulbs, which are not only less power consuming, but also glow more brighter. With the ZP having a network of more than a 100 computers and an almost equal number of fans, the ZP can look forward to cutting down on electricity bills. Once the project is completed, the ZP will approve the same and forward it to the Government.

ZP President Parimala Shyam said that only Bengaluru and Chitradurga ZPs have installed solar power units and now, Mysuru has joined the them. Pointing out that the solar power unit will be a boon for the ZP, she said that there is a proposal before the Government for utilisation of solar power even at the Gram Panchayat (GP) level. Once approved, this project will help the GPs to save money on power bills, she added.

M. Vinay, a First Division Assistant at ZP, said that the ZP general meeting had approved the project out of the 2017-18 funds. Once the Project is completed, the ZP will approve it and forward the same to the Government, he added.