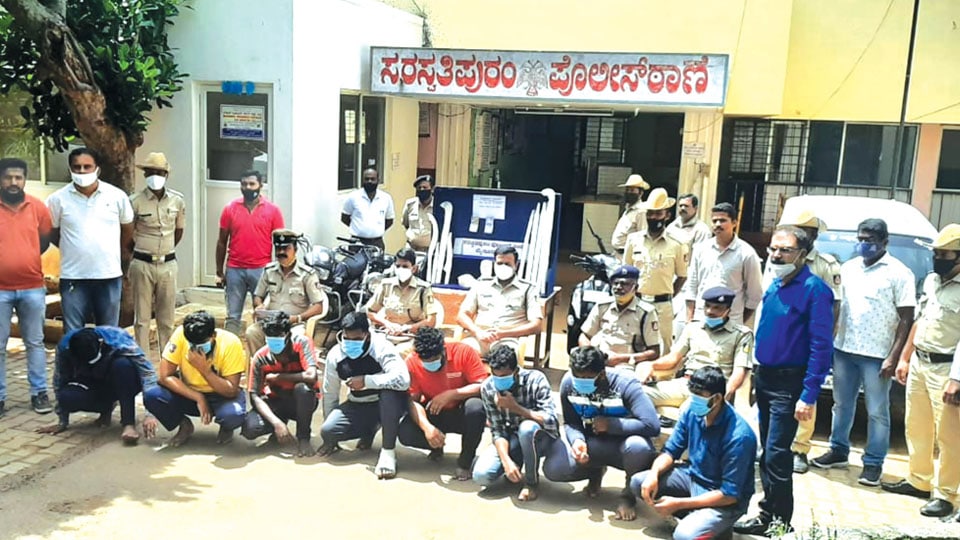 Mysore/Mysuru: Saraswathipuram Police, on Sept. 9 night, have arrested a gang of eight dacoits who were waiting to loot people and have seized one Maruti Van, four two-wheelers, 11 mobile phones, one hockey stick, two daggers, five monkey caps, five chilli powder packets, one iron rod, three wickets and one machete (long) from them.

Saraswathipuram Sub-Inspector N. Bhavya and staff, who were on their regular beat on Sept. 9 night saw eight persons standing near a Maruti van in a suspicious manner near Bhogalingeshwara Temple on the Ring Road and took them into custody on suspicion.

On enquiring them, the Police came to know that they were waiting to threaten the public and motorists and loot cash and valuables from them, following which the Police arrested them.

The arrested are Sharath, Sumanth, Dharmesh, Dinesh, Sunil Kumar, Shashank, Karthik and Mahadev. Following their arrest, the Police have solved a total of five cases — one robbery case each at Saraswathipuram, Vidyaranyapuram and Lakshmipuram Police Station and one attempt to murder case each at Vijayanagar and K.R. Police Stations.