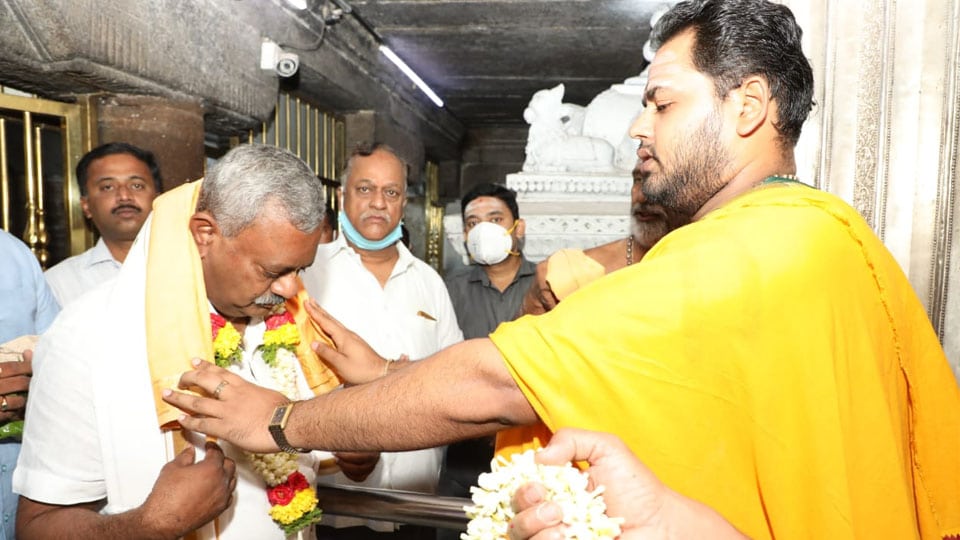 Nanjangud: District Minister S.T. Somashekar, who visited Nanjangud this morning, offered special puja at the famous Srikanteshwara Temple in the town that is dedicated to the Hindu supreme deity Shiva, also called Sri Nanjundeshwara (The Lord who drank poison to save the earth) and prayed for the well-being of the State and make it Corona-free like Mysuru district.

Speaking to presspersons after offering special prayers, the District Minister said that he had prayed to the God to make the entire State free from Coronavirus soon.

Continuing, Somashekar said that with the blessings of Goddess Chamundeshwari and Lord Nanjundeshwara, Mysuru district is now Corona-free and added that he had prayed to protect the people of Karnataka.

Regarding opening of temples, the Minister said that discussions were going on and a decision in this regard would be taken after examining the guidelines by the Centre.

MLA B. Harshavardhan, BJP leader H.V. Rajeev and others accompanied the Minister during his temple run.