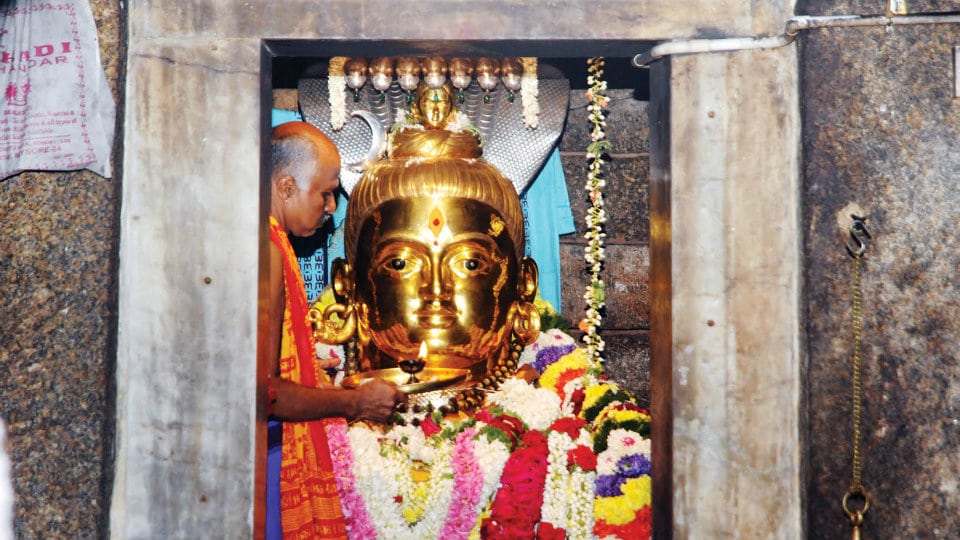 Mysuru/ Chamarajanagar:  Mahashivaratri was celebrated with all devotion, festive and religious fervour across the twin districts yesterday.

All Shiva temples were crowded with devotees who lined up to pay their obeisance. Ardent devotees observed day-long fasting and were awake all night (Jaagarane).

Suttur Mutt branch at the foot of Chamundi Hill, Kuderu Mutt, Hosamutt and other Mutts had organised special pujas and rituals as part of the festival.

The Muzrai Department had put up pendal at the Palace premises, made arrangements for distribution of prasadam and drinking water facilities for devotees. Prasadam was tested by officials of the Department before serving to devotees, according to Muzrai Department Tahsildar Yathiraju.

Sri Ganapathy Sachchidananda Ashrama: Various religious programmes including Maha Ganapati Homa, Rudra Homa and mass prayers were held under the guidance of Sri Ganapathy Swamiji at the Ashrama premises on Ooty Road. The Ashrama provided an opportunity for the devotees to perform abhisheka to the Shivalinga till late night. Hundreds of devotees chanted hymns, rudraparayana and stayed awake throughout the night. The American diamond-studded crown with golden mask that adorned the Shivalinga, was the major attraction of this year celebrations.

M.M. Hills: Lakhs of devotees offered special prayers at Male Mahadeshwara Swamy Temple atop M.M. Hills in Chamarajanagar district and participated in religious programmes which were conducted all through the night. Car Festival was organised where the chariot carrying deity was pulled by devotees.

Police Security: To prevent untoward incidents and ensure peaceful conduct of Shivaratri, city Police had deployed Police personnel for security at all the Temples.