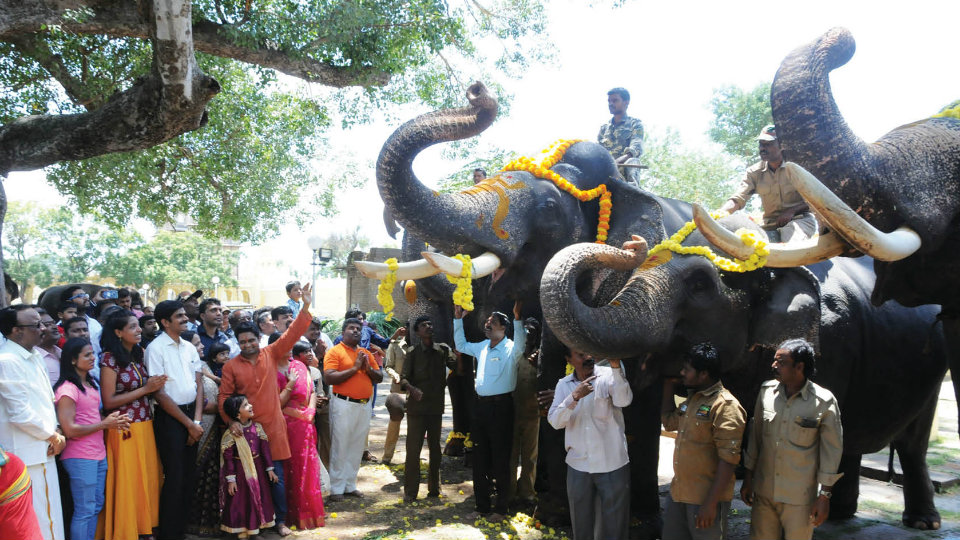 Special pujas to Dasara elephants at Palace on Ganesha Chaturthi

Mysuru: On the occasion of Vinayaka Chaturthi, pujas were performed to the first batch of six Dasara elephants at the Mysore Palace where they are being housed and trained for the grand finale. The event was jointly organised by the District Administration and the Forest Department. A large crowd was a witness to the ceremony.

Before the puja rituals began, the elephants — Arjuna, Gopi, Vikrama, Dhananjaya, Varalakshmi and Chaitra — were bathed and garlanded. Flower petals were showered on them and pujas were performed by priest S.V. Prahallada Rao.

Rituals were performed on the auspicious Abhijin Lagna between 12.10 pm and 12.30 pm. First, a Padapuja was performed and the pachyderms were sprinkled with turmeric and kumkum. Later, Shodashopachara puja was performed.

The elephants were fed with traditional sweets (that are also kept before Ganesha idol) including Modaka, Kadubu, Kodubale and Karjikai. Fruits, sugarcane and jaggery were also fed to the elephants. According to priest Prahallada Rao, every year, Ganesha Chaturthi is celebrated in a grand way at the Palace by performing pujas to the Dasara elephants.

Pujas are performed to elephants to ward off any ‘Vighna’ or obstacles for Dasara as Lord Ganesha is believed as a remover of all obstacles, he added.