Home » Sports » Specially-abled arm wrestlers, who believe in their abilities to excel 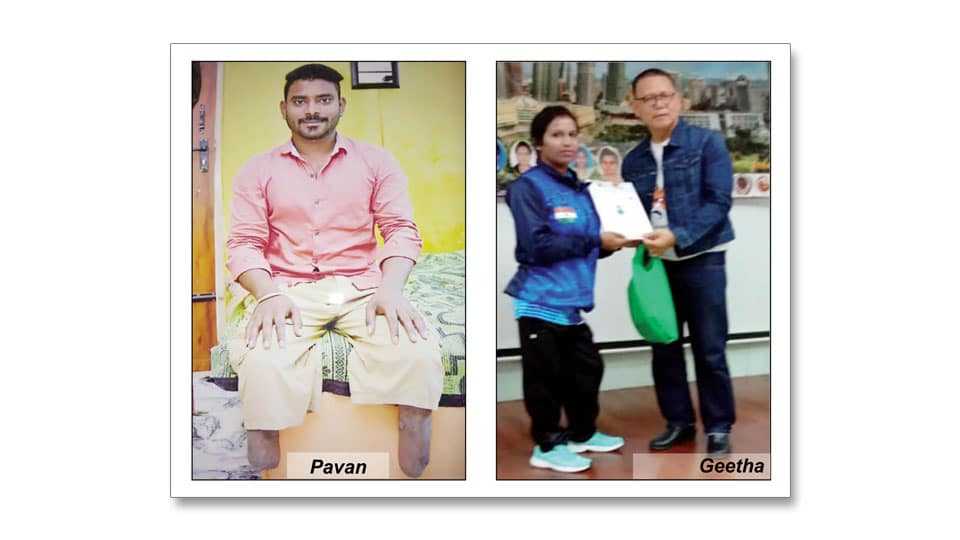 Specially-abled arm wrestlers, who believe in their abilities to excel

Athletes with Physical Disabilities (AWPD) are a problematised group. Their accomplishments are questioned and devalued as less valid or challenging than those of able-privileged athletes. They are not party to the often problematic veneration of athletes in today’s society, nor are they permitted to participate in generalised sporting events. This apart, being born with disability would not bring much pain, but losing one’s limbs in an accident at a young age, will shatter the dreams pushing the person into depression.

But Pavan, son of auto driver Balakrishna and Gowri couple of Kumbarakoppal despite losing both his legs in an accident, did not lose hope and went on to train in arm-wrestling and would be taking part in the National-level Arm-wrestling Championship to be held at Chhattisgarh on June 19.

Pavan, while studying in 8th standard at JSS School at Vijayanagar, was walking on the railway track near Metagalli with his earphones on to go to Balamuri for a swim when a train coming from Arasikere side hit him and ran over his legs resulting in Pavan’s legs getting severed.

After availing treatment and getting discharged from the hospital, Pavan, who was depressed stayed at home for a few years during which he developed his self confidence, Pavan, who wanted to achieve something has begun his training in arm-wrestling under Nitesh of Siddarthanagar. Pavan has turned his disability into special ability by Arm wrestling.

At present, Pavan is employed at L&T in Hebbal and has been provided artificial limbs by Mysuru District Specially-Abled Federation.

Geetha selected for arm-wrestling championship: Another specially-abled arm wrestler Geetha, has been selected to participate in the National-level Arm Wrestling Championship at Chhattisgarh.

A resident of Kalyangiri in city, Geetha has come out of all odds and has been working at the office of Karnataka State Licenced Electric Contractors Association at Nazarbad since seven years.

Geetha had taken part in the National-level Sitting Volley Ball Tournament held at Coimbatore from Dec. 22 to 28, last year and the team bagged the second place. Geetha also took part in the arm-wrestling tournament, organised by Karnataka Arm-Wrestling Association at Karkala on Feb. 3 this year and bagged the first place for Mysuru District.