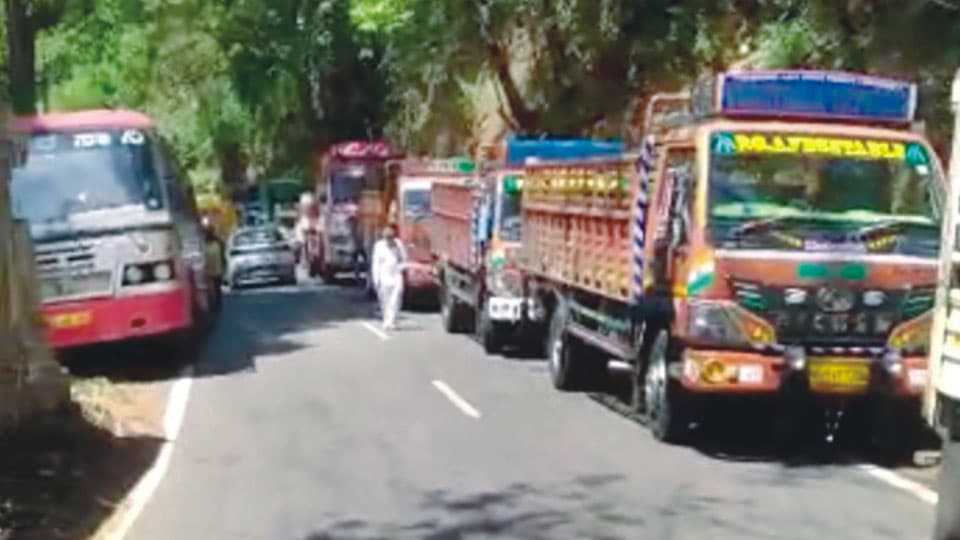 Spike in Coronavirus cases: Karnataka closes all roads to Kerala

Madikeri/Mysuru: In a sudden move, Karnataka closed its border roads with neighbouring Kerala this morning, citing the recent spike in COVID-19 cases in that State. Following the sudden move, borders at Bavali check-post in Mysuru, Makutta and Kutta check-post in Kodagu witnessed a line-up of vehicles.

Restrictions have been put in place on the 17 roads near the borders in South Karnataka. Among them, roads are closed at 13 points. In 4 points, the restrictions are severe.

It may be recalled here that Karnataka had closed and even filled up roads with soil a few months ago when Kerala was witnessing a huge spike in COVID-19 cases. Last week, the Karnataka Government said that those travelling from Kerala to Karnataka need to mandatorily provide RT-PCR certificate showing COVID-free status. The test should have been taken not less than 72 hours before the Karnataka-bound trip.

This order meant only for travellers from Kerala, irrespective of the duration of their journey. However, ambulances have been exempted from the new rule. After Karnataka authorities blocked the road via Bavali check-post entry was denied even for goods vehicles proceeding to Karnataka.

Following this, several people in the area protested by blocking vehicles with Karnataka registration from entering Kerala.

Vehicles were even blocked at Thalapady check-post  in Mangaluru.

Protesters squatted on the road terming the Karnataka Government’s insistence on RT-PCR test unreasonable, the protesters demanded the immediate rollback of the rule. This also led to argument between the protesters and the commuters.

The Karnataka Government order came after the neighbouring State witnessing a spike in COVID-19 cases. Kerala has been consistently seeing a significant number of daily cases. The restriction came after several nursing students from there testing positive for the virus after returning to Karnataka.