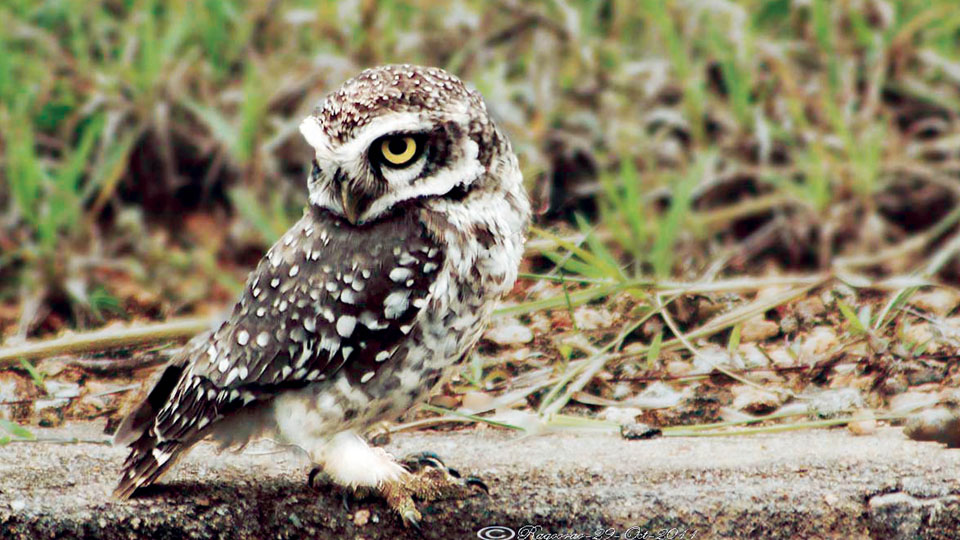 The Owls are an Enigma. Feared and Fascinated both. They are Revered and also Despised. A sort of mixed feeling, all because of a lack of understanding of the Fascinating Birds of Prey, The Night Hunter, and the Indian Spotted Owlet. Here we publish a write-up on Spotted Owlet (Athene Brama) by  Ragoo Rao, Ethologist, to create awareness on the marvellous creatures of nature and a little concern towards them. Now read on…

Athene, in the Greek language, means the Goddess of Wisdom and a Protector of Human Settlements, and Brama from our mythology means Bhrama Deva, the Wise Sage. Hence, the Taxonomical name given to the Indian Spotted Owlet is Athena Brama. Considered the Vahana of Goddess Lakshmi, the Spotted Owlets are the most highly adaptive birds among all Owls, to survive the onslaught of habitat degradation and also habitat changeover, successfully leading their Nature Ordained way of life in urban human habitations and also in the countryside in its natural habitat.

Owls being mostly nocturnal hunters spend their day in a heavily canopied tree perch, safely concealing themselves while sleeping during the day hours. Some species of Owls burrow in the soil like rodents and spend the day underground.

Our Little Spotted Owlet, no bigger than a big Pigeon, is crepuscular (at dusk) and nocturnal. In urban areas, the Spotted Owlets roost in the daytime in well-covered small trees or if they get a chance in the wall crevices of old buildings, tree cavities and seepage vents in the large storm water drains.

Spotted Owlets, wait for dusk, and then come out of their day-roosts and hunt the streets and fields for rodents. They are frequently seen on electric cables or poles calling from perch with their peculiar calls ‘chirurrr-chirurrr’ or a ‘cheevak, cheevak’ given repeatedly in a crescendo. Spotted Owlets in fact are very vocal and have been observed to use at least thirteen different vocalisations.

The owl’s signal call — used by adult males and females to mark and defend territory, and by males delivering food to females — is a series of four hooted notes, with the middle two closest together. The hoots have a deep, pure tone, with females’ voices higher than males. To stay in contact, mated pairs also emit a hollow whistling sound that rises in pitch at the end. Fledglings use a similar high-pitched whistle to beg for food.

Apart from vocalisation and different calls, the Spotted Owlets have a well-developed body language too. Having wonderful eyesight, and with the advantage of having their eyes almost straight looking like a human face has, the Owlets are bestowed with both monocular and binocular vision and use it so efficiently to pinpoint the source of the sound or sight. Owls use their eyes also as a threatening arsenal. When they discover they are being stared at, they blow up their eyes full and start bobbing their heads.

Spotted Owlets are so well accustomed to human presence and have learnt the art of living unnoticed in their niche of life. If fact they are so well accustomed to evading our sighting of them, that they remain noiseless in the daytime, only fluttering away to a distant perch in a nearby tree, if intruded upon accidentally by any human. Watching an Owlet, tucked in a crevice or a hollow tree cavity, without creating eye contact with them is very amusing. They appear like CCTV cameras, scanning the surroundings for all happenings.

There is a pair of day-roosting regularly, in a tree cavity right on the busy Kalidasa Road of Mysuru. Only a few people have noticed it and they do not spread the word, lest the ‘Good Luck’ bestowing Owls desert the place. It is considered a Good Omen to sight an Owlet.

Spotted Owlets are highly sociable with their own kind. They are frequently sighted in their day roost, in good numbers. Three, four and even five of them have been sighted to have a common day roost cavity or a high perching leafy tree canopy. When disturbed or threatened by their roost, the Owlets fly away scattering themselves in different directions, to confuse the pursuer.

They have a strategy. Flying away in different directions and perch in trees or other tall structures and keep a watch on the happening, occasionally giving out a high-pitched gurgling call. They locate each other through these calls. Later when the coast is clear and they feel safe, they give out a different low-pitched call and they all reciprocate with their answering calls. Finally, when the disturbance is clear, they all one-by-one fly back in a swift short flight and enter the roost cavity. This is a fascinating way the Owls communicate with each other. The Owlets do have a well-developed vocal and body language communication system.

Owls have always been fascinating and fearsome. In Hindu mythology, they are considered the Vahana of Goddess Lakshmi, the Goddess of Wealth. It is considered a good omen to sight an Owl when you are on a business errand or venture. Superstitious people even keep a picture of the Owl to have a darshan every day when they start their business. Ironically, the same Owls are despised and chased away when they are seen in their compounds on their roofs. The truth is that Owls are only another species of birds, which are highly evolved as night hunters and gifted by nature with fine-tuned vision and hearing.

Spotted Owlets bind pairs and build nests in tree cavities or niches in a ruined wall. They lay from four to six eggs and both parents take equal responsibility to raise the brood and teach their young fledglings the survival art.

Spotted Owlets, being hunters of rodents, help humans in keeping the rodent infestation in check. Their particular liking for large beetles and locusts, help the farmers in pest control.

The Spotted Owlets, occupy their own niche in the ecosystem and should be respected and left alone. They should be protected also.

According to the IUCN (International Union for Conservation of Nature) Red List, the total Spotted Owl population size is around 15,000 mature individuals. Currently, this species is classified as Near Threatened (NT) on the IUCN Red List and its numbers, today are decreasing.