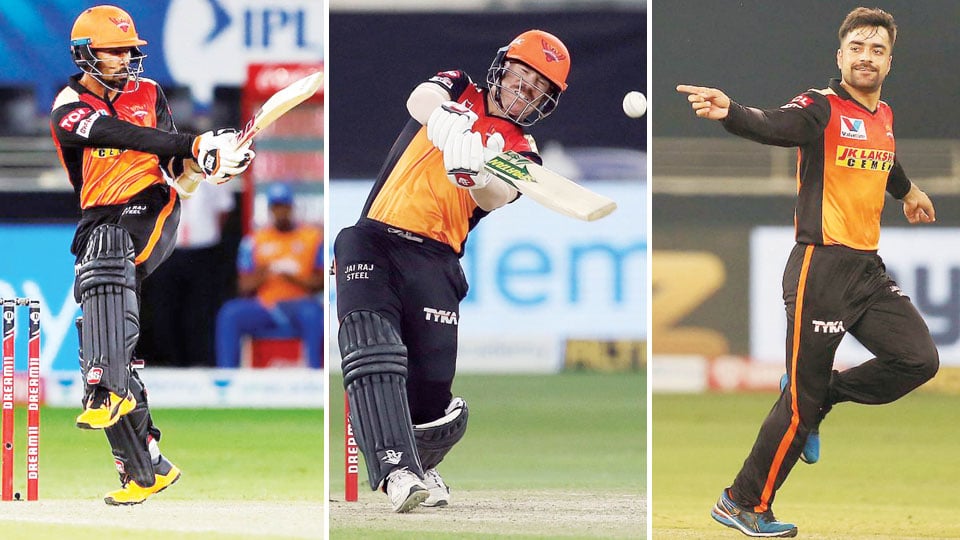 Needing 220 runs to win, DC lost two wickets in the first two overs as Sandeep Sharma and Shahbaz Nadeem dismissed Shikhar Dhawan and Marcus Stoinis. While Ajinkya Rahane and Shimron Hetmyer took DC past fifty at the end of the sixth over, the two got out in the next over as Rashid struck twice in his first over. Although Shreyas Iyer and Rishabh Pant added 23 runs together, Vijay Shankar, before he had to leave the field due to injury, got the wicket of DC skipper in the 12th over.

In the next over, Rashid dismissed Axar Patel and completed the best bowling display of this IPL season, returning with the figures of 3/7 from his four overs.

While Rishabh scored 36 off 35 balls, Sandeep Sharma had him caught behind the wickets in the 17th over. SRH eventually bowled out DC for 131 and sealed an 88-run win on their skipper Warner’s birthday.

SRH made a brisk start as Saha played his shots to take his side to 33/0 after the first three overs. The David Warner-Saha pair completed a fifty-run stand in 28 balls. Warner then went after Kagiso Rabada, hitting the right-arm pacer for four fours and a six as he moved past fifty in 25 balls and SRH posted 77/0 at the end of the powerplay.

The Warner-Saha juggernaut continued as the two completed a century stand in 52 balls.

DC managed to break the opening stand in the 10th over after R. Ashwin got Warner out after the SRH skipper hammered 66 off 34 balls.

While Warner was dismissed, there was no respite for DC as Saha continued his merry ways and brought up his half-century in 27 balls. The SRH wicket-keeper-batsman then took on Axar Patel in the 12th over, hitting him for a six and a four as SRH moved to 142/1.

Saha’s merry ways continued as he cranked a six off Rabada in the 13th over as SRH completed 150 before the Saha-Manish Pandey pair brought up their fifty-run stand.

Anrich Nortje ended the Saha-Pandey partnership after Saha got out after his belligerent 87 off 45 balls, a knock in which he hit 12 fours and 2 sixes.