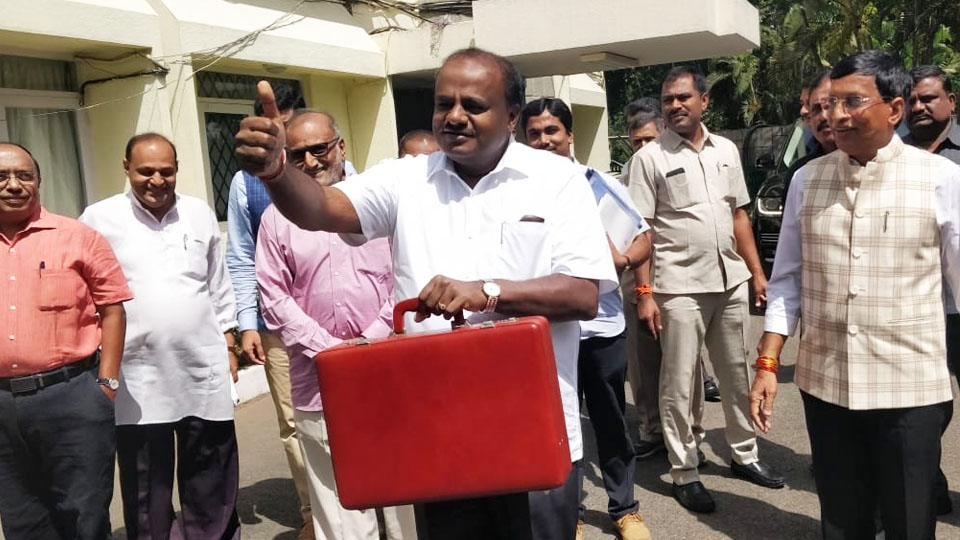 Our ‘Mannina Maga’ has indeed launched or rather unleashed on us a very powerful State Budget. If not anything else, it is clearly and only a ‘LET US STAY IN POWER’ budget! The thing that stands out in this budget is the farm loan waiver which was the main issue on which the last State election was fought and partly won by JD(S), the Chief Minister’s party. Although it was only a ‘part victory’ it certainly won him a full chance to become the Chief Minister as it often happens in our country with its skewed politics!

Let’s leave aside the mind boggling figures of the budget to the front pages of the newspapers where they rightfully belong and look here only at where the budget leaves us. Under this new amnesty scheme all farm loans availed by farmers for whatever reason and un-repaid by them for whatever reason, are going to be waived off to an extent of rupees two lakhs by the present government and the lending agencies will be reimbursed these amounts by the government over a period of four years.

Now, is this waiver scheme likely to make farming more lucrative for our farmers many of whom are slowly but steadily distancing themselves from farming? Is it likely to stop our farmers from committing suicide like they are now doing? I think not. This one time relief will only make them heave a sigh of relief just for this year and continue with their doggedly antiquated and very unscientific farming practices which in just a couple of years are guaranteed to once again land them in debts bringing all of them back to square one in their deadly game of snakes and ladders.

As things stand today, small-time agriculture is perceived as a loss-making and thus very frustrating pursuit in our country by most farmers. Although most people think that our farmers are quitting farming or even ending their lives because of crop failures or price slumps it is not always so. As we all know very well, retail prices of all commodities are always very high. Many farmers are in the doldrums because of unwise borrowing and unwise spending and a good many of them are mired in misery because of bad habits like gambling and drinking, the two evils that are rampant in our society today. I have personally spoken to many villagers who come to me as my patients about why farming is seen as a curse and why our farmers are unhappy. Almost all of them are of the opinion that it is only partly because of crop failures but greatly due to poor prices for their produce due to exploitation by middlemen.

The perishable nature of most fruits and vegetables and the insufficient cold storage facilities close to their towns and villages forces them to part with their produce hastily at throw-away prices. Farmers who lug their produce to markets do not find buyers thanks to the solidarity of powerful cartels of unscrupulous middlemen. A few years ago I have seen my own first cousin Amjed, a farmer, selling away the beans grown on his farm at one rupee a kilo to a middleman when it was selling at rupees twelve a kilo in the retail market exactly a kilometre away. Today he has quit farming altogether.

My close friend Shivashankar, who once had a bumper crop of high quality onion, transported two truckloads of it all the way to a well-known onion market in Tamil Nadu with high expectations of a good price only to find that there were simply no takers for it there. While the traders there were selling onion of a much inferior quality for good prices they refused to buy his produce even for a modest price. When after two days of waiting, his commodity stacked tightly in the trucks, started deteriorating due to built up heat, he was forced to part with it at a price dictated by them. The result of his year-long toil was that he could barely recover only the transportation cost for his produce.

With their disorganised existence, with no change either in their farming practices or in their marketing strategies our farmers land in bad financial messes and end up quitting their professions or sometimes their lives too. Let alone being the best solution, waving off farm loans is not even one of the solutions to save our farmers. In fact, more than with the intention of helping our farmers, this measure has been announced by the government to actually garner support from the masses and save itself from being hounded out by the Opposition. If it was actually interested in the long-term good of our farmers could it not have thought of getting small farmers to create manageable sized and sustainable co-operatives like some Milk Unions to pool and sell their produce without the havoc meted out to them by blood-thirsty middlemen? Small co-operatives like these can effectively monitor what their members do in handling their personal lives too and  thus prevent them from borrowing money at astronomical rates of interest for weddings and festivals.

They can educate them about how to manage these events with greater pragmatism than what they now possess. They can also lend them money at reasonable rates of interest and even ensure responsible repayment through peer pressure. Today we have many women’s self-help co-operatives which have been doing this very successfully over many years. The mental well-being of their members too is commendable.

Our government has no proposals to usher in any austerity measures on the funds earmarked for providing perks and freebies shamelessly enjoyed by MLAs, MLCs or Ministers. But it proposes to make good the losses it is going to incur on farm loan waivers by taxing good and honest tax-payers through increased cess on petrol, diesel and electricity which already come at great cost. This is just like robbing rich Peter to pay poor Paul!

You and I may not like it but worldly-wise Kumaranna has nothing to lose because he knows very well that there are more vote-casting Pauls than tax-paying Peters in our society!