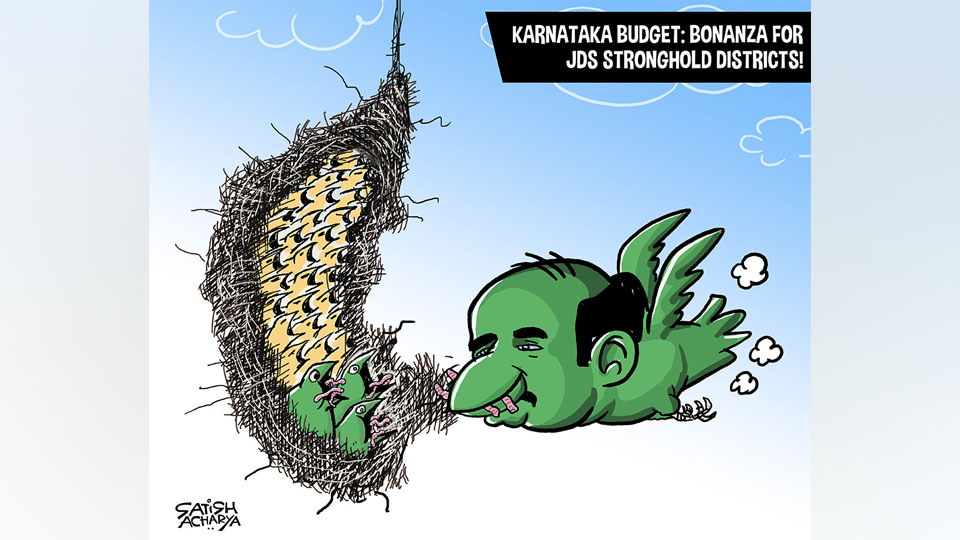 Chief Minister H.D. Kumaraswamy at a post-budget press conference asked, “What is wrong if I give a little more to the districts that voted for our party?” He was talking about Mandya, Hassan and Ramanagara districts that voted overwhelmingly for JD(S) and got special attention in his budget.

Well, favouritism is wrong in a democracy. A government has to invest tax-payers’ money where there are better returns on investment, both socially and economically and not to secure a vote-base.

Let’s see some of the projects this government has proposed for its three pet districts.

Mandya is getting Rs. 30 crore to upgrade its medial college but the 60,000 government schools across the State are getting just Rs.150 crore for repairs!

Mandya is getting Rs.50 crore to meet drinking water needs and Rs. 23 crore for mini water supply while North Karnataka is still waiting for some water.

Hassan too gets a Rs. 70 crore drinking water project, a mega dairy project costing Rs. 50 crore and a 400-bed hospital even though there already exists a 500-bed hospital! Most intriguing is that Hassan also gets Rs. 10 crore to revive an old implements manufacturing plant… keyword “revive.”

The CM’s third pet district Ramanagara is getting a 300-bed super-speciality hospital. While Kodagu, a district far from an urban centre and that gives much more revenue to the State than Ramanagara, does not even have a proper government hospital. Is this because Kodagu voted for BJP?

Apart from a Hospital, Ramanagara is set to get a children’s park at a cost of Rs. 30 crore! Why do we need this when there is already an international standard Children’s Theme Park called ‘Wonderla’ in Ramanagara itself ?!  Also Ramanagara is getting a Rs. 50 crore Film University!

Speaking of Universities, the CM has announced four new Universities in the State and they seem ridiculous.

The first one is a ‘Sports and Body Building University’! Yes, Body Building! and it’s not even an Olympic sport. And do we need a University for Sports? Instead, why can’t the government first provide proper nutrition, travel allowance and infrastructure to the sports persons and sports hostels that already exist in the State?

READ ALSO  In Love with GHOSTS

Then there is the ‘Film University’ to be set up in Ramanagara at the cost of Rs. 30 crore and  finally, the fourth University, a ‘Tourist University’ in Hampi! Why do we need a University to train tourist guides?

All the above training can be fulfilled by adding a new certificate programme at the existing Universities and Police training centres.

Our government can’t even find a Vice-Chancellor for the famed 100-year-old Mysore University and are unable to fill over 50% of the teacher vacancies in the University and they want to build more  Universities?!  How audacious.

By the way, what did Mysuru get? Silk market, a plan for chip manufacturing unit and a frozen semen distribution centre.

Oh ! And KRS is going to be turned into Disneyland at a cost of Rs. 5 crore! When the CM’s  SUV itself costs over Rs. 1.5 crore, how can he expect to build a Disneyland at just Rs. 5 crore ?!  Also our government can’t even maintain a small Bal Bhavan in our city and they want to build Disneyland ?!

There are many other ridiculous projects such as Rs. 20 crore to house artists coming from other countries! Why? Can’t they stay in hostels and hotels? Also there are crores being given to Mutts, why? They are anyway exempt from paying tax so let their devotees pay them, why should the tax-payer? Then there is Rs. 5 crore for Karnataka Bar Council to encourage “judicial activities.” What does this even mean?

Now, the centrepiece of the Budget was the loan waiver. We wonder how much of this money will actually reach the needy farmer. To begin with most of the farmers who have taken loan under Rs. 2 lakh have borrowed from a loan shark, not a bank. So who is going to help them? And more importantly, how often is the government going to keep bailing them out? If this becomes a routine, then even farmers who don’t need the money will take a loan and wait for a waiver. This is already happening.

With unabated migration of villagers to urban centres, what is needed is skill training and support for small scale industries which create jobs.

Now, the government has announced a “Compete with China’ programme in this budget, but before making such grand programmes let the government first take back the vacant industrial lands being hoarded by land-sharks illegally and give it to genuine industries.

While farmers are being saved, the middle class is being harassed. Petrol  may force people to use public transport, but where is the public transport that is efficient? And increase in diesel price will make other products costly and increased electricity tariff is going to hurt industries.

While the three districts — Mandya, Hassan and Ramanagara — got sweet deals and projects what did others get? Well, North Karnataka got two hospitals, a solar field and two semen distribution centres.

Then there are Udupi, Dakshina Kannada, Uttara Kannada, Kodagu, Chikkamagalur, Davanagere, Raichur, Yadgir and Bagalkot, these districts got nothing.

If one notices, the CM’s favourite districts got numerous projects that can be started quickly, which means money can be released immediately whereas the few projects that are in North Karnataka are long-term projects that will take time to even take off by which time election would have come and gone.

This step-motherly treatment is surely going to embolden the leaders in North Karnataka like A.S. Patil Nadahalli and Umesh Katti, who have been demanding separate Statehood for North Karnataka.

Now, it was the job of the Congress to remind our CM that he cannot play favourites but Congress is so desperate to stop Modi, they don’t care if Karnataka suffers.

The Congress seems to forget that the CM is securing his main vote-base and by doing so he can forever hold Congress hostage.

For now, the CM’s budget seems to indicate that he does not expect his government to last long and is preparing for the next election.

Sadly for us Mysureans, everyone has let us down… First the PM came and told us Mysuru can be made into Paris. Now, the CM says he’ll give us Disneyland. Looks like we Mysureans will forever be in a Dreamland.