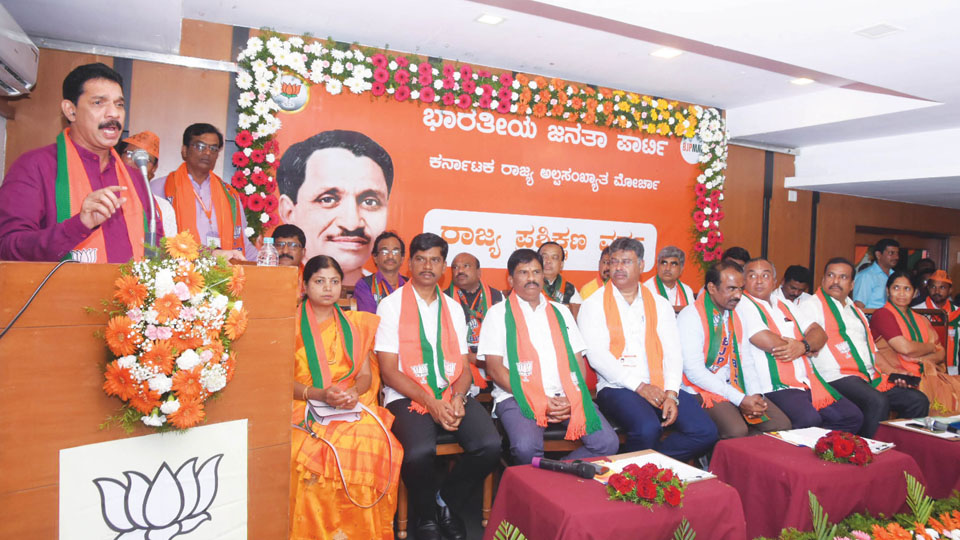 Speaking on the occasion, he said the State Government is working towards the development of the minorities in Karnataka.

BJP respects those who respect Nationalism, he said adding that “Gandhiji advocated Rama-Rajya. But when Congress was ruling there was Ravana Rajya in the country. BJP is now fulfilling the Rama-Rajya dream of Gandhiji.”

“It is the dream of the BJP to make India a Vishwa Guru. We consider the whole world as a family and BJP is functioning as per this ideology and there is no compromise in the ideology of BJP. Because of this, Atal Bihar Vajpayee led the country without a blemish for 6 years. Similarly, Modi is now leading the country without a blemish for the last 8 years with the motto of  Sabka Saath, Sabka Vikas,” opined the State BJP President.

Maintaining that since Jansangh days till now the BJP has never compromised in its ideology and working style, Kateel said that both the party and the country have grown enough because of this commitment.

“There is no family politics in BJP. We believe in Nationalism but in Congress both father and son are politicians. Congress hasn’t sung Vande Mataram even for a single day. They only chant Indira ki Jai, Rajiv Gandhi ki Jai, Sonia ki Jai and Rahul Gandhi ki Jai. Congress never said Bharat Mata ki Jai. Because of this, the country is becoming Congress-mukt (free),” he stated.

Claiming that BJP is committed for minorities welfare, Nalin Kumar Kateel pointed out that the party had supported people like Dr. Abdul Kalam and George Fernandes when in power.

“BJP respects those who respect Nationalism and opposes those who are anti-nationals.  The BJP Government at the Centre has provided justice to Muslim women by abolishing Triple Talaq and ensured their security,” he observed. Apart from this, the State BJP Government has released Rs.500 crore for the welfare of the minorities and implementing various schemes for their welfare, the State BJP President concluded.