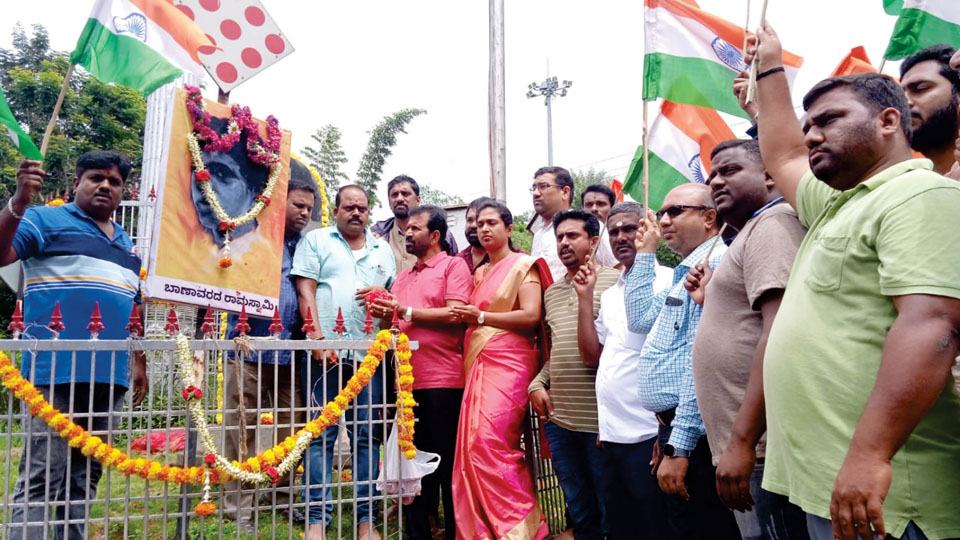 Mysore/Mysuru: The 75th death anniversary of young freedom fighters Banawara Ramaswamy (in whose name Ramaswamy Circle in the city stands), Kadakola Toranayaka and Ranga, who died in Police firing during the ‘Mysore Chalo’ movement in 1947 were remembered at a programme organised by Yuva Bharat at Ramaswamy Circle  here yesterday.

Floral tributes were offered to the portraits of the martyrs and Ramaswamy Memorial.

Speaking on the occasion, MLA L. Nagendra said that three youngsters including Ramaswamy died in the Police firing that took place on Sept. 13, 1947 during the Mysore Chalo.

Pointing out that the nameboard of Ramaswamy would be installed on all the five roads leading to the Circle, which is ever busy, Nagendra recalled how students had organised the Mysore Chalo movement at the Circle, which was then known as Five Lights Circle.

Stating that in 1947, the then Deputy  Commissioner of Mysuru Nagarajarao had ordered firing when Ramaswamy and his fellow students surged to hoist the National Flag at the Circle, the MLA said that the heroics of the students then are an inspiration to the young generation of today in respect of Patriotism and Nationalism.

Mayor Shivakumar, in his address, said that a committee will be constituted for holding programmes to remember the icons of the city who had made enormous contributions and sacrifices.

The AIDSO too observed the 75th death anniversary of Ramaswamy at another programme organised at Ramaswamy Circle in the heart of the city.

Addressing the gathering, District AIDSO (All India Democratic Students Organi-sation) President B.J. Subash said that Ramaswamy was a brave teenager when he felled to a bullet while trying to hoist the National Flag.

Maintaining that Ramaswamy jumped into the freedom movement when he was just 17 years old, he said that Ramaswamy played a very vital role in Mysore Chalo Movement, which ultimately led to the installation of a democratic and responsible Government in the then Princely State of Mysore and thereby acceding  to the Indian Union.

AIDSO office-bearers Chandrakala, Asiya Begum and others were present.