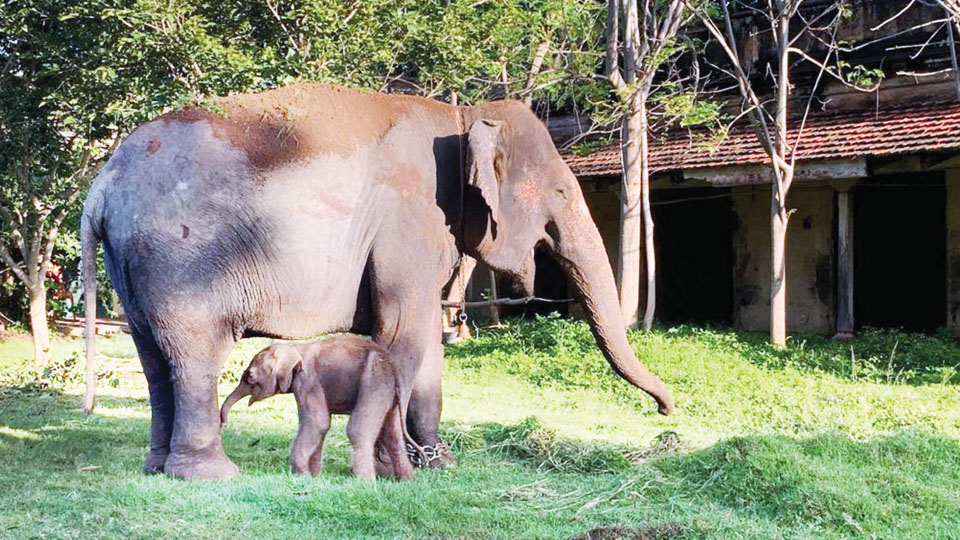 Mysore/Mysuru: The birth of a male calf to Lakshmi, the 22-year-old Dasara elephant in the Mysore Palace premises has brought cheer to the Navarathri festivities and the members of the Mysore royal family, Mahouts, Kavadis and their families are elated.

Equally happy are the Forest Department officials, who are taking good care of the mother and son. Lakshmi gave birth to a healthy calf at 8.10 pm yesterday. The Forest Department has created a separate enclosure for Lakshmi and her calf and entry has been restricted. The Mysore Palace Board is thinking of naming the calf as ‘Ganapathi’. Vishalakshi Devi, sister of late Srikantadatta Narasimharaja Wadiyar had taken personal care in bringing up Lakshmi and the bond between the mother elephant and the royal family has grown only stronger with the birth.

In fact, Lakshmi was separated from her mother deep inside the forests. After taking permission from the Forest Department, Vishalakshi Devi, passionate about animals, provided food and shelter to Lakshmi at her resort near Bandipur Tiger Reserve. Later, following a Supreme Court order, Vishalakshi Devi handed over Lakshmi to the Forest Department.

Even after many years after handing over Lakshmi, Vishalakshi Devi made it a habit to visit Rampura Elephant Camp regularly and used to feed her with sugarcane and jaggery.

This is the second time an elephant has given birth inside the Mysore Palace premises during Dasara. 15 years back elephant Sarala had given birth to a female calf and it was named ‘Chamundi’. In the past, Durgaparameshwari, Vijaya, and Chaitra have given birth in the forest camps after participating in the Dasara festivities.

Lakshmi was brought to Mysuru Dasara for the first time in 2017. But as she panicked during the cannon firing round, she was not included in the Vijayadashami procession and had to remain inside the Palace. She was brought this year in the first batch on Aug. 7 and she behaved normally during the recent exercise of cannon firing.

Yesterday afternoon, Lakshmi started behaving in an unusual way which  caught the attention of the Mahout and the Kavadi, who alerted the officials. When veterinarian Dr. Mujeeb examined the elephant, it was found that she was fully pregnant and would deliver soon.

Lakshmi was later moved near Bhramapuri Gate where cooked food is prepared for the pachyderms. Her health was put under close watch and she went into labour and delivered at 8.10 pm. Deputy Conservator of Forests Dr. V. Karikalan, RFO Santosh Hoogar and veterinarian Dr. Mujeeb are overseeing the arrangements.

Normally, pregnant elephants are not brought for Dasara from the elephant camps and this time, Kunthi was rejected as she was pregnant. Instead of Kunthi, Sugreeva made it to the elephant team. But the Mahouts and Kavadis were unaware of Lakshmi being pregnant. Jayaprakash at Rampura camp could have sired the calf, said the elephant caretakers.

With the birth, the number of elephants in the Palace has risen to 15 but it is unlikely that Lakshmi will participate in the Vijayadashami procession. She is drained off and needs rest to recover her energy. Sources said that only 13 elephants will take part in the Jumboo Savari. As per the advice given by the veterinarians, the Forest Department has decided to keep Lakshmi and the calf within the Palace premises for a few more months as it is not advisable to shift the mother and son back to the Rampura Elephant Camp before that.