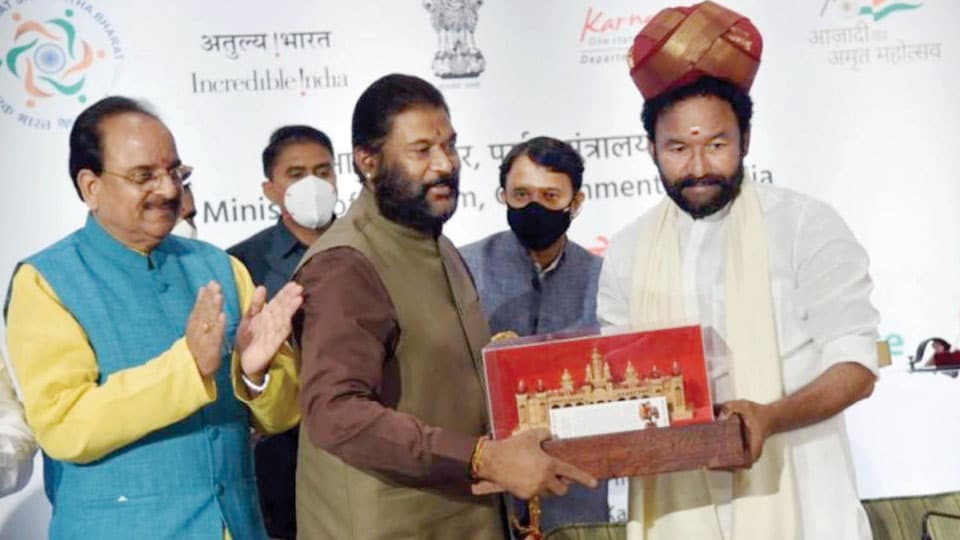 Mysuru/Bengaluru: At a time when concerns are being raised over repeated landslides due to heavy rain and development activities atop Chamundi Hill, the State Government has resubmitted a proposal to the Centre to secure funds to holistically develop the Hill under the Pilgrimage Rejuvenation And Spiritual,  Heritage Augmentation Drive (PRASHAD) Scheme launched by the Centre.

The proposal was resubmitted after certain issues were raised at the recently concluded (Oct. 28 and 29) ‘Tourism and Culture Ministers Conference of the Southern Region’ in Bengaluru. The intention of the conclave was to highlight the heritage and cultural tourism initiatives, skill development and potential of cruise tourism of the southern States and Union Territories.

In 2019, soon after the announcement of the Scheme fund allocation, the State Government had initiated the process of identifying the projects to be taken up and among them was a museum-cum-information centre (Integrated Interpretation and Command Centre) at the foot of Chamundi Hill and also certain development projects atop the Hill.

However, the project has not yet taken off and the issue was raised at the conclave by State Tourism Minister Anand Singh who sought to know why the funds have not been sanctioned to Karnataka under PRASHAD Scheme. Replying to Anand Singh, Union Tourism Minister G. Kishan Reddy said that Karnataka failed to provide a comprehensive report to include Chamundi Hill under the PRASHAD Scheme and there were glitches.

Soon after the observation was made, the State Tourism Department hurriedly pushed through a fresh proposal to develop ‘Chamundi Hill Circuit’ under PRASHAD Scheme. If approved, the Scheme will boost the tourism sector of Mysuru that is reeling under the pandemic.

At the tourism conclave, Karnataka Tourism Department made a detailed presentation on developing the Chamundi Hill Circuit at a cost of over Rs. 50 crore. The Government wants to beautify the Hill and its foothill by upgrading facilities, restoring and redeveloping and beautifying the Nandi Statue, Devikere and improving the approach to the Chamundeshwari Temple premises with a guided walkway, interactive signage, smart parking and centralised ticketing and parking facilities.

Sticking to the 2019 proposal of museum-cum-information centre at the Chamundi foothill, the Department has proposed a ‘Smart Heritage’ idea where an interactive museum and interpretation centre will be set up at the foothill. The centre will narrate the history of Chamundi Hill and Mysuru with audio visual aid, showcasing the Wadiyars of Mysuru, a children’s park with the theme of Mahisha and Mahishasura Mardhini.

Also the fresh proposal advocates a zero-carbon emission circuit with no vehicles to be allowed atop the Hill where electric buses would ferry the devotees and people. According to Karnataka Tourism Department Director Sindhu B. Rupesh, the Union Tourism Ministry has given in principle approval for the fresh proposal submitted to develop Chamundi Hill under PRASHAD Scheme.

Before the Centre gives final approval, a delegation will visit the Hill and as per the suggestion made by the Central Tourism Department, the immediate surroundings of the Temple (‘Praakaara’) have been included in the fresh proposal. “We have explained the historical and spiritual significance and speciality of Sri Chamundeshwari Temple and how an integrated and holistic development can be achieved through PRASHAD Scheme and the response has been positive,” she said.