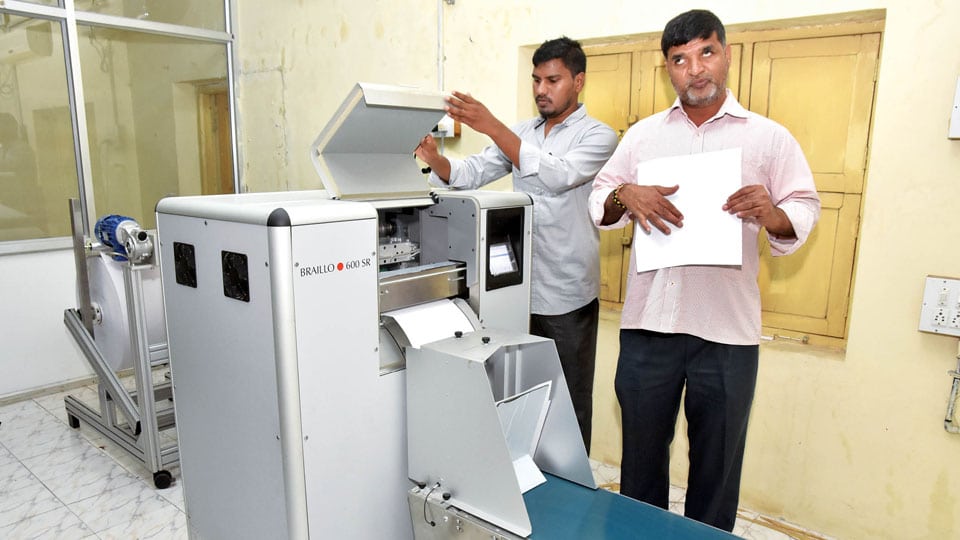 Students at the Blind Schools across the State will be freed of their unending wait for textbooks in Braille format as a brand new and advanced Braillo 600 SR machine has arrived at the State’s lone Government Braille Printing Press in Bamboo Bazar, New Sayyaji Rao Road, Tilaknagar.

The machine, imported from Norway, has been procured at a cost of Rs. 75 lakh by the Mysuru City Corporation (MCC). This Press prints text books for students from Class 1 to 10 and the text books are brought out by Department of State Educational Research and Training. The Press prints all subject text books and per year, it prints over one-and-a-half lakh textbooks and over 50,000 other books that help visually challenged children all over the State.

A single page in a normal text book will amount to 4 pages in Braille script and the advanced machine is fed with Baden Software to print the books. The script is fed to the machine by the software and pages are churned out.

The word ‘Braille’ has become synonymous with the cluster of raised dots on a piece of paper which the blind would run their fingers over to read. But the much-revered coded text for the blind actually bears the name of its French inventor and educator Louis Braille, whose birthday is celebrated across the globe on Jan. 4 by organisations and visually impaired individuals. The coded dots are still relevant today and help millions of people with blindness to gain knowledge.

The Braille Press was established in 1982 and the new electronic machine was set up in 1984 with the help of UNICEF funding. Earlier, the books were printed for Class 1 to 7, before expanding its capacity to print Class 10 books. In 1985-86, the Press bagged an award for printing large number of books in less time. Following demand for school books, the State Government purchased 4×4 Braille Embosser (computerised-operated machine) for Rs. 14 lakh in 2000. The machine helped print books other than academic ones and with great speed.

With a rise in the number of Blind Schools, the Press was overburdened with orders for Braille books. In 2005-06, it imported Braillo 400 SR machine from Norway at a cost of Rs. 50 lakh (under Sarva Shiksha Abhiyan). The machine, having a capacity to print 2,000 Braille papers in an hour, helped in preserving data which is already etched on aluminium sheets.

The computer-run equipment helps access Braille data through CDs and by doing away aluminium sheets, which saves time and money. Later, the necessity of one more advanced machine was felt and Braillo 600 SR machine was imported with more advanced technology and speed.

The Press, functioning under Directorate for the Welfare of Disabled and Senior Citizens, also prints and distributes Braille books on general knowledge, music, Kannada and English grammar apart from a calendar. There are over seven employees who run and manage the Press.

The Press provides books to visually impaired children in primary schools free of cost and charges one-third of the printing cost for books supplied to high school students. Once a book hits the print, it is verified by proof readers to ensure that there are no errors or mismatch between the original text and the Braille script. Next, the script goes to the editing department for approval and after the copies are printed, they are assembled and papers are set and bound together.

There are over 54 schools that educate visually challenged in the State both private and Government-run. The Press caters to the needs of these schools.  “Braille provides the basic building block for learning. Even today, it is easier to teach Braille to a blind child than technology though no one can dispute the advantages technology has brought. We have placed a request to the Government to import Inter Point 55 Braille Embosser Machine. This machine is the latest in the block and this state-of-the-art machine prevents interruptions in printing. We are awaiting the clearance from the authorities,” said Professor and Pressman Mohan and Superintendent Satish who manage the Press. Apart from churning out thousands of text books, the Press has produced works like Chomana Dudi, Mysooru Mallige, Mankuthimmana Kagga, Garathiya Haadu, Naadaleela, Sakhigeetha and other works in Braille script for Kannada Book Authority.