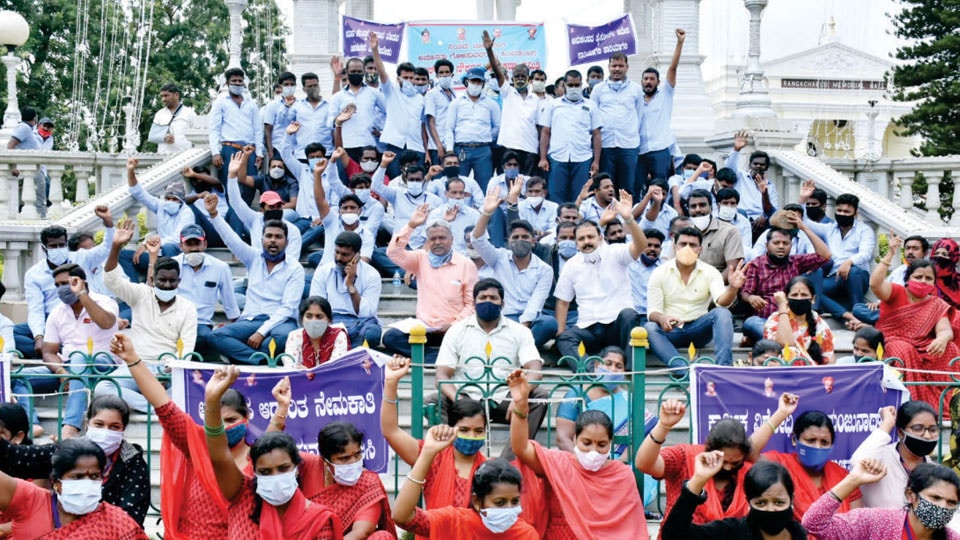 Mysore/Mysuru: The massive indefinite stir launched by the contract employees of Government-run Silk Factory on Manandavadi Road in city, under the banner of Silk Weaving Factory Employees Union, entered sixth day today, with the employees staging protest near the office of the Deputy Commissioner (DC) after they were denied to stage protest anywhere near the factory.

The protestors, who were seeking fulfilment of their demands, which chiefly included regularisation of employees who were appointed on compassionate grounds, hike in wages and payment of wage dues for the lockdown period among others, are staging a protest for a different reason since yesterday. To take back the suspension orders of 39 employees. The 39 employees were suspended for staging protest, the agitators alleged.

Meanwhile, Congress leader N.M. Naveen Kumar, who is spearheading the protest, said that though the employees reported to work after the Additional Deputy Commissioner intervened, 39 employees were handed over suspension orders for protesting against the Administrative Board. He also alleged that there was discrepancies in wages and added that though the salaries of the employees is about Rs. 18,000, they were being paid only Rs. 9,000 and demanded a probe into it.

The protestors demanded the intervention of the District Administration and direct the Karnataka Silk Industries Corporation (KSIC) Administrative Board to revoke the suspension order and also to remove KSIC MD Leela Manjunath.

The protestors warned of staging a protest along with their families and also gherao Chief Minister B.S. Yeddiyurappa when he comes to Mysuru.