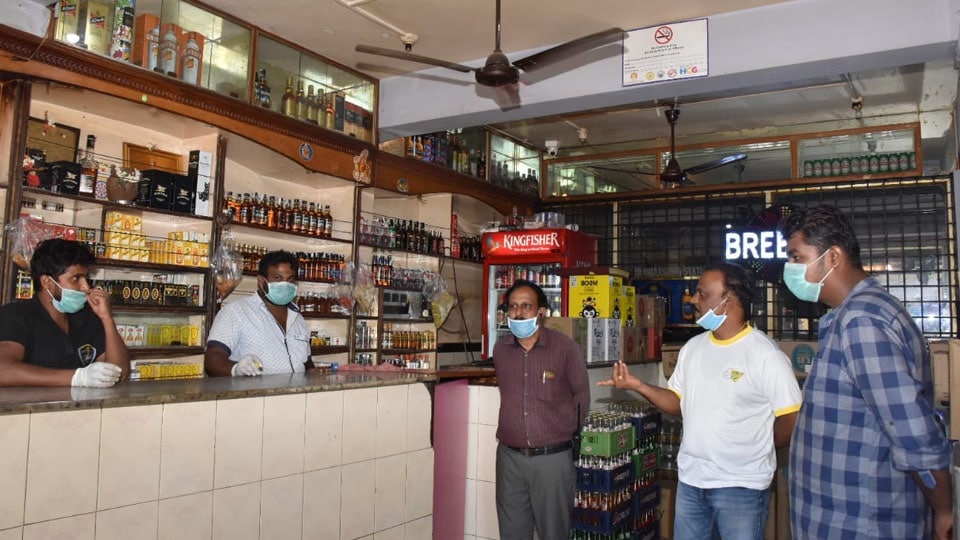 Mysore/Mysuru: Desperate to get rid of old stocks piled up due to the over 40-day lockdown since Mar. 24 midnight to May 4, the Karnataka Government yesterday allowed pubs, bars, clubs, restaurants and lodges across the State to also sell liquor at retail prices from today till May 17.

The Government, however, warned pubs, clubs, bars and restaurants that their licences would be cancelled in case they were caught serving liquor or beer on their premises to the customers.

Following the order, all the bars, pubs and restaurants in Mysuru opened this morning to sell their existing stock of liquor at MRP. The order has been passed, converting pubs, bars, clubs, restaurants and lodges in non-COVID areas into temporary retail outlets to sell all brands of Indian-Made Foreign Liquor (IMFL) and beer till May 17 but not serve.

The order is applicable to standalone CL-4 (clubs), CL-7 (hotels and lodges) and CL-9 (bars and restaurants) outlets. These outlets are also required to fulfil a set of conditions which chiefly included sale of only sealed bottles, maintenance of social distancing and sale of liquor only at MRP.

The order also allowed transporting of liquor stocks from these stores to CL-2 (MRP) outlets, which were earlier allowed to sell liquor from May 4. However, bars, restaurants and clubs are barred from procuring fresh liquor from State-owned Karnataka State Beverages Corporation Ltd., during this period.

Though liquor sales have been soaring by the day since retail shops were allowed to re-open from May 4, huge stocks remained unsold or un-cleared in pubs, clubs, bars, restaurants and hotels, as they were not allowed to re-open due to the lockdown extended till May 17.

“With pubs, clubs, bar and restaurants also selling liquor, long queues at retail shops due to huge demand and social distancing will reduce, as customers will be able to buy their favourite drinks in their nearest pub, club, bar or lodge,” officials said. The order will also allow pubs, bars, clubs and hotels to get rid of beer stocks, which have only six-month shelf life.

Mysuru Excise Deputy Commissioner K.S. Murali  told ‘Star of Mysore’ this morning that there are a total of 300 CL-4, CL-7 and CL-9 licensed liquor vending outlets in the district, including 138 in Mysuru city alone. “We have formed Mobile Squads to inspect such premises and to serve notice on cancellation of their licences if they were found serving liquor to customers, besides retailing,” he said.

The order directed pubs, clubs, bars and lodges to allow only one customer to enter their respective premises at a time and leave soon after purchasing liquor at the MRP. “They (pubs, clubs and bars) should also ensure customers stand 1-2 feet apart in queues and wear masks. The customers are not allowed to drink liquor on their premises,” he added.