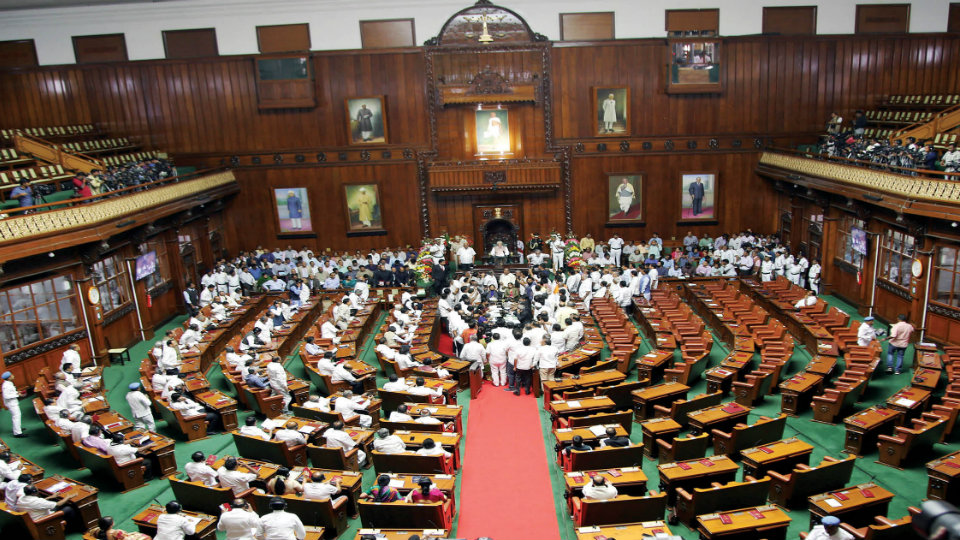 BJP Legislators stormed into the Well of the House soon after the Governor started delivering his address. However, the Governor continued to read out his speech and wound it up after reading just two pages out of the 22-page speech copy.

The BJP leaders allege that the Government doesn’t have majority because of the dissidence within the coalition, and in such a situation, the Governor cannot legitimise the Government by giving his speech.

“The coalition is making the Governor read a bunch of lies. Where is the Government,” asked the BJP Legislators led by Leader of Opposition B.S. Yeddyurappa, creating a ruckus. With the BJP unrelenting to the requests of the Governor, Vala exited the Assembly Hall within seven minutes of his entry.

When the House resumed after 20 minutes, the BJP chose to remain quiet even as the Speaker read out condolence messages over the demise of 111-year-old Siddaganga Mutt Seer Sri Shivakumara Swamiji and former Defence Minister George Fernandes, among others.

The four MLAs — Ramesh Jarkiholi, Umesh Jadhav, Mahesh Kumthahalli and B. Nagendra — who skipped the first Congress Legislative Party meeting in January, remained absent during the Budget Session as well. Meanwhile, Congress MLA Anand Singh, who was assaulted by his party colleague and MLA J.N. Ganesh, arrived for the Session, as the party had issued a whip to all its Legislators to be present. Singh, who is recuperating from grave injuries to his eyes and rib fracture, was wheeled into the House.

Kampli MLA J.N. Ganesh, who is facing attempt to murder charges for attacking Anand Singh, too gave the Session a skip. The Police are yet to arrest the MLA. Interestingly, JD(S) MLA Narayan Gowda was among the absentee MLAs.

Today’s developments come on a day when rumours of Operation Lotus resuming began doing the rounds. The BJP had said, it was not averse to moving a no-confidence motion against the Kumaraswamy-led Government. Congress Legislative Party leader Siddharamaiah issued another notice to four dissenting party MLAs today to give their explanation to him before or after the Session.