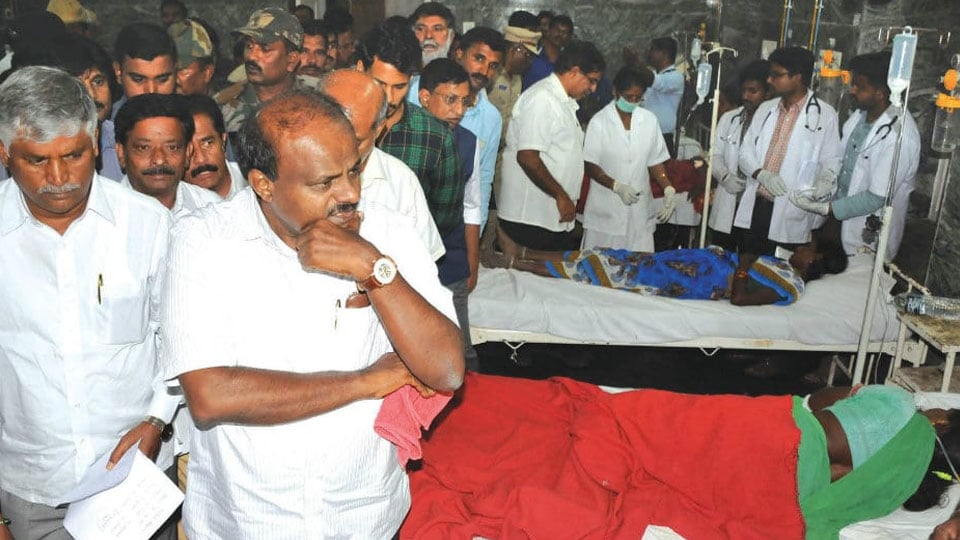 Mysuru: It was on December 14, 2018 the dastardly act of human poisoning shook the conscience of the Nation where hundreds of devotees were served Prasadam laced with poison at Kichuguth Sulwadi Maramma Temple in Hanur taluk of Chamarajanagar district.

Over 17 persons were killed and more than 120 fell ill after consuming the prasadam laced with pesticide on that day and a majority of the affected were admitted to various private hospitals in Mysuru as Chamarajanagar district does not have proper medical infrastructure and facilities.

Hospitals in Mysuru too welcomed the patients and began emergency treatment and many lives got saved due to urgent medical intervention. But sadly, the State Government has not yet cleared the private hospital bills and the hospital authorities are running from pillar to post to get the bill cleared. “We treated the patients on priority and the Government promised immediate clearance of bills. Now we are put in a helpless situation,” said doctors.

Though the Government has taken over the management of the controversial temple and the criminal trial is on to punish the perpetrators, the bills are yet to be cleared.

Many VVIPs including Chief Minister H.D. Kumaraswamy and his Cabinet colleagues visited the hospitals and directed private hospitals to chip in as the State-run K.R. Hospital was flooded with victims.

“We went by the directive of the State Government and Chamarajanagar District Administration who promised to clear the bills immediately. But not a single rupee has been paid. We trusted them and they failed us,” said Dr. S.P. Yoganna of Suyog Hospital. Like Suyog Hospital many other private hospitals too treated the patients.

“The Government owes us Rs. 25 lakh and we treated 19 patients in our ICUs and other critical care units for over a month. With such a huge amount pending, how can we run the hospital,” he said. Dr. Yoganna said that after the patients got well, as per the Government directive, the bills were submitted to Chamarajanagar DC who sent it to the Government.

Reacting on the issue, Mysuru District Health Officer Dr. Venkatesh said that the Chamarajanagar DC had sent a report to the Government and the Government has to release funds. “This might have been delayed due to elections. Funds will be released soon,” he said.

Meanwhile, it is learnt that private hospitals that treated the victims have submitted a bill of Rs. 1.27 crore to the Government.

Accused produced before Court: The four accused in the Sulwadi Maramma Temple poisoning incident were produced in person before the District and Sessions Court Judge B. Basavaraja at Chamarajanagar yesterday. Accused Immadi Mahadevaswamy alias Devanna Buddhi, Manager of the Temple Madesha, his wife Ambika and former employee of the Temple Doddaiah Tambadi appeared in before the Judge.

As the advocate for the accused was not present, Judge Basavaraja postponed the hearing to June 25 and asked the accused to appoint their advocates as early as possible. The Judge told them the Court will appoint a Public Prosecutor to argue their case if they failed to appoint advocates.