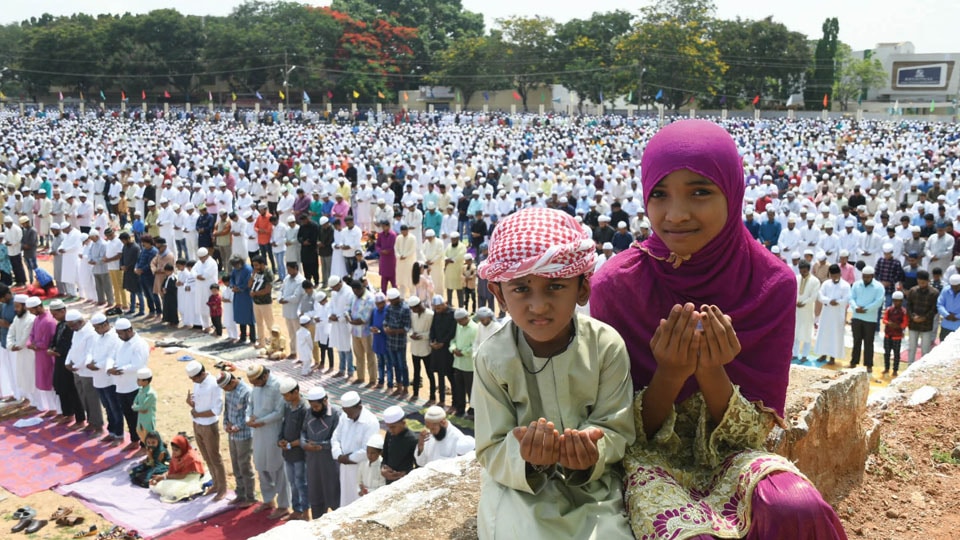 Mysuru: Thousands of Muslim brethren gathered at the sprawling Eidgah Maidan in Tilaknagar today to offer prayers as part of Eid ul Fitr, also called the “Festival of Breaking Fast.” Hazarath Moulana Mohd. Usman Shariff, Sir Khazi of Mysuru, who led the mass prayers, said: “After one month of fasting, we assemble in the open space to thank the Almighty Allah. The Muslim brethren in the Holy Month of Ramzan give 2.5 percent of their income to the poor in the name of Zakath and also donate fitra before going for Namaz on Eid day, so that the poor can also celebrate Eid happily.”

Sir Khazi appealed the non-Muslims to take part in this festival and spread the message of communal harmony and brotherhood. He also prayed for the development and security of the country and welfare of the citizens. The prayers began at 10.30 am and ended at 11.45 am.

MLA Tanveer Sait offered Namaz at Masjid e Kutchi Memon on Ashoka Road at 8 am. He greeted the Muslim brethren and other leaders for taking part in the festival. Later, he joined the mass prayers at Eidgah Maidan in Tilaknagar.

The Eidgah Maidan was a sea of humanity as the people who attend the prayers every year at the Maidan said that this time there were more people who had gathered for the mass prayers than the previous years.

This was very much evident, as the road from Maulana Abul Kalam Azad Circle (Highway Circle) to Millennium Circle near LIC and again from Highway Circle to RMC Circle on Sayyaji Road, was chock-a-block with vehicles, both four-wheelers and two-wheelers parked on either side of the road. Even the bylanes leading to the Eidgah Maidan were filled with vehicles.

It was a common sight to see children hugging and greeting each other as they also participated in the mass prayers.